Fringe Festival on the Royal Mile

The Edinburgh Festival, is not, as often thought, a single event.

Festivals Edinburgh (Edinburgh Festival City) is a collective term for a number of independent annual festivals which run throughout the year.

Each festival, while managed separately sits under the Festivals Edinburgh umbrella. Their mission statement says “…acting on behalf of and representing the collective strengths of the Edinburgh festivals.”

Established in 1947, International Festival, held in August, is packed with the very best of classical music, theatre, opera and dance.

Each year since that first event, thousands of artists, from around the world, have performed in the Scottish capital.

It is according to organisers, “an unparalleled celebration of the performing arts and an annual meeting point for people of all nations.”

In perhaps the biggest piece of news of 2022, the festival announced that world-famous violinist Nicola Benedetti will become Festival director in October 2022. She will be the first woman and the first Scot to hold the post.

2022 is the 75th anniversary of Edinburgh’s first festivals.

The event has grown steadily over the years and each year thousands of performers will take part in thousands of shows in hundreds of venues across the city.

More than any other festival, the Fringe brings colour, atmosphere and a slightly manic quality to life in Edinburgh during August.

There are many and varied venues, indoors and outdoors.

The Royal Mile, already crammed with people during the summer which might well be the biggest stage in town is also filled with show promoters and performers going through their acts.

There are often musicians, actors, jugglers, dancers and acrobats jostling for space and vying for attention on this ancient thoroughfare.

It’s busy but wonderful fun. It’s a once in a lifetime thing.

The Edinburgh International Film Festival is a chance to see work from new British talent, together with world-class animation, experimental work, documentaries and work from top directors.

Held during August, the Film Festival brings stars to the red carpet and visitors, local and international to Edinburgh’s cinemas.

The Edinburgh Jazz and Blues Festival, held in July, is Britain’s largest jazz festival with around 170 concerts held each year.

Launched in 1978, the festival has developed from relatively humble beginnings to the spectacular, more diverse presentations of today.

From classic jazz to electronic and Chicago Blues it’s the perfect opportunity to bring Scottish and international jazz talent together.

Also in August. the Edinburgh International Book Festival, which opened its doors in 1983 was held in the delightful Charlotte Square Gardens, in Edinburgh’s New Town. It regularly attracted the cream of British and international writing.

Edinburgh Festivals says, “The largest collection of the written word in the world, brings entertainment and inspiration to Edinburgh…” 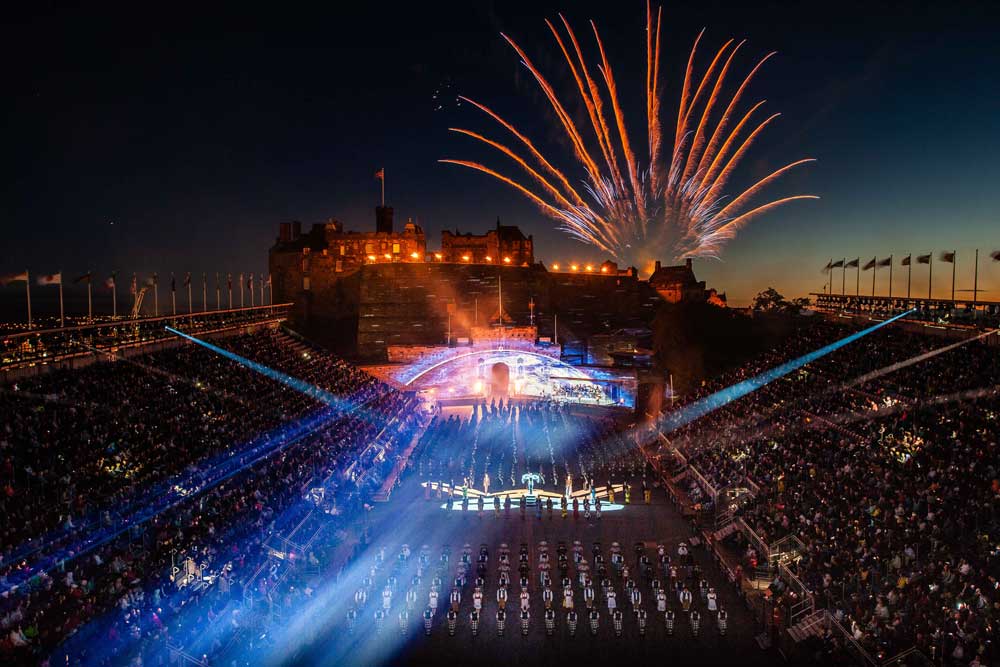 Held in August each year, the tattoo has grown considerably since the first relatively simple event took place in 1945 at the Ross Bandstand in Princes Street Gardens.

Now this magnificent event, this magical journey, with performers and musicians from around the world, plays out to huge and enthusiastic audiences on the esplanade and ramparts of Edinburgh Castle.

Launched in 1989, this October festival brings musicians and storytellers together in Edinburgh’s Storytelling Centre on the Royal Mile.

The organisers sum it up this way. “Great stories well told can evoke indelible images in the mind of the listener, offering visitors and locals a wonderful opportunity to enjoy the extraordinary tales…”

Other Edinburgh Festivals include:

For further details, tickets and venue information visit the Official Edinburgh Festivals website which also has links to accommodation in Edinburgh, travel and other essential information.

Click the button below for all the festival news.

Other things to do in Edinburgh

The Edinburgh Index on Truly Edinburgh allows readers to find a range of content about the city.