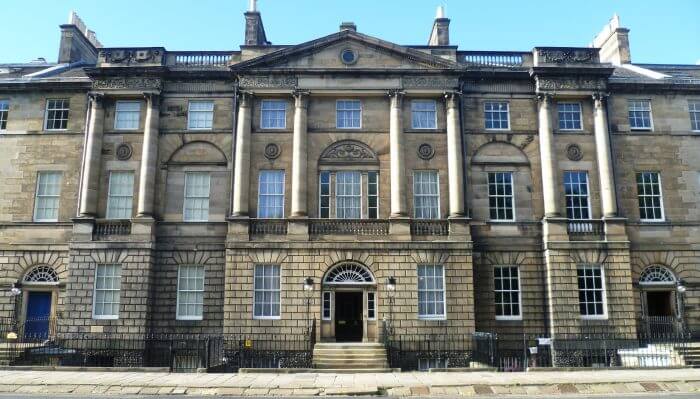 Together with the neighbouring Old Town, UNESCO awarded it World Heritage Status in 1995. UNESCO declared it the “… harmonious juxtaposition of two historic areas, each with many important buildings…”

You’ll find many of Edinburgh’s fine range of shops in the New Town. On Princes Street the larger more familiar stores while on George Street and some of the other surrounding streets, there’s an abundance of independent shops with cafes, bars, restaurants and boutique style hotels.

The new Johnnie Walker Princes Street, all eight floors of it, is the new kid on the block. Overlooking Edinburgh Castle, it offers an exciting new whisky related addition to the Edinburgh visitor experience.

For art lovers, this James Craig inspired part of the city offers an Aladdin’s cave of treasures – from old masters to contemporary sculptures and almost everything in between.

Princes Street Gardens, which lies below Edinburgh’s Mound, is the dividing line between the Old and New Towns, are dominated by the monument to Sir Walter Scott. If you’re feeling energetic enough, take the 287 steps to the top to enjoy an unrivalled view over large parts of central Edinburgh.

This wonderful green space in the heart of the city is also home to a number of other statues and monuments including the David Livingstone statue, the Royal Scots Regimental Memorial and the Scots American War Memorial. The impressive neoclassical Ross Fountain, originally sculpted in France, sits in the west side of the gardens.

On a dry day the gardens are a popular place for locals and visitors to relax and watch the world go past.

In the first half of the 18th century Edinburgh (Old Town) had seen a large influx of people looking for work, creating in the process a desperate need for new housing.

Lord Provost George Drummond often dubbed the ‘founder of modern Edinburgh’, Sir Gilbert Elliot of Minto and a few others proposed the building of a new town to alleviate the cramped and insanitary conditions that people were forced to live in.

Monumental problems faced them – the draining of the stinking sewer that was the Nor’ Loch (today the site of Princes Street Gardens) and the building of the North Bridge among them. 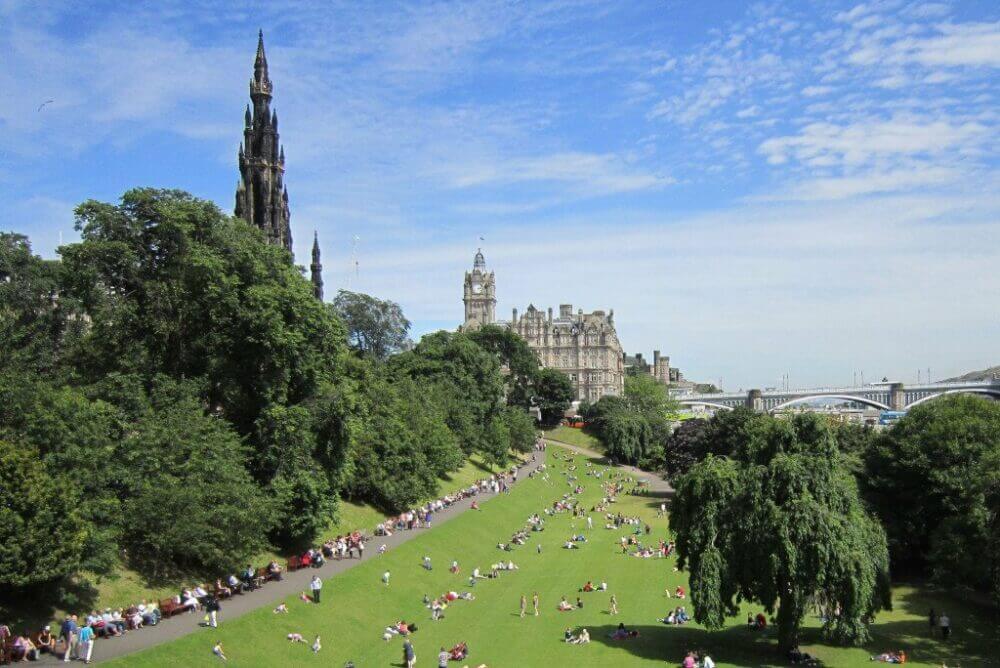 Following a competition to find a suitable architect to design the New Town, the almost unknown James Craig, only 27 years old, was selected. Building work on a classic grid pattern of streets began in 1767.  Robert Louis Stevenson called them, “draughty parallelograms.” Construction on what became a series of new towns continued off and on until finally completed in the 1890s.

For those who could afford it – the nobility and merchant classes – the fine Georgian houses in the New Town offered open space and fresh clean air to its new residents.

Sadly, it did nothing to alleviate the squalid conditions in Edinburgh’s Old Town.

The 1861 census painted a bleak picture of life in some of the towering lands (tenement buildings) highlighting the plight of large families crammed into one room with no toilet or fresh drinking water.

In the same year the Builders Journal said, “We devoutly believe that no smell in Europe and Asia…can equal in depth and intensity the diabolical combination of sulphurated hydrogen we came across one evening in a place called Todrick’s Wynd.”

As you walk around the stylish Georgian streets it’s easy to let your mind wander – what was life like here for the rich and famous in the late 18th and early 19th century? The aptly named Georgian House in beautiful Charlotte Square has the answer.

Originally built in 1796 for John Lamont, chief of the Clan Lamont the Robert Adam inspired house is now one of the New Town’s most popular visitor attractions, today administered by the National Trust for Scotland. Next door is Bute House the official residence of the First Minister of Scotland.

On the west side of the square are Charlotte Square Gardens dominated by a statue of Prince Albert on horseback. Rising behind it is the dome of West Register House, originally a Robert Adam designed church now used by the National Records of Scotland to hold court, government and business records.

If you’re visiting in August the gardens come alive when the marquees of the Edinburgh International Book Festival go up.

St Andrews Square, at the opposite end of George Street from Charlotte Square is another space to just sit and watch people go by. Dominated by the towering monument to Henry Dundas, 1st Viscount Melville it’s popular with office workers grabbing a sandwich and a coffee at lunchtime.

General Register House, opposite the Balmoral Hotel on Princes Street, was originally designed by Robert Adam, although completed by another architect. Today it’s home to the archives of the National Records of Scotland and a good starting point if you’re in town to do some family research.

Even if you are not ‘researching’ the building is well worth visiting if only to gaze up at the magnificent domed roof of the Rotunda – a design inspired by the Pantheon in Rome. Some of the plasterwork shows Roman and Greek scenes although there are Scottish thistles too.

Behind the General Register House is the remarkable Archivists’ Garden, a haven of peace described by the National Records of Scotland as a, “unique garden planted with 57 plant species, all connected in some way to Scotland’s collective memory, whether through myth and folklore, heraldry, or association with individual famous Scots.”

The view from Calton Hill

Calton Hill, which rises on the eastern edge of this neoclassical masterpiece is a real breath of fresh air – quite literally on a breezy day.

Robert Louis Stevenson who was born in Heriot Row, one of the finest streets in the area, described the view from Calton Hill as one of the best in the city as you could see both Edinburgh Castle and Arthur’s Seat.

Among Calton Hill’s ‘eccentric’ collection of monuments to explore are the incomplete National Monument inspired by the Parthenon in Athens, the telescope shaped Nelson Monument built to commemorate the death of Admiral Lord Nelson at the Battle of Trafalgar and the Dugald Stewart Monument built in memory of one of Scotland’s greatest philosophers.

Across the road is the Old Calton Burial Ground one of the city’s many atmospheric old burial grounds. While it’s dominated by the Political Martyrs’ Monument you might be surprised, particularly if you’re an American, to find a statue of Abraham Lincoln – erected in memory of Scottish soldiers who died in the American Civil War.

Although other cities played their part, Edinburgh’s New Town was according to UNESCO a “major centre of thought and learning in the 18th century Age of Enlightenment…”

Among this “hotbed of genius” were men like geologist James Hutton, philosopher David Hume, economist Adam Smith and others who challenged the existing thinking on science, art, literature and more.

It’s worth pausing for a moment to consider some of the street names. The aforementioned Heriot Row, was named after George Heriot, ‘Jingling Geordie’ jeweller and moneylender to James VI and Queen Anne.

The best way to explore this delightful area of Edinburgh is on foot – enjoy!