The site, which became Stobs Military Camp, was purchased by the UK government from the owners of the Stobs Castle Estate in 1902. The following year it was established as the main training base for British soldiers in Scotland. Following the outbreak of war in 1914 Stobs was transformed into what became the largest internment camp in the world and the headquarters of the POW camp system in Scotland. This is its fascinating story.

A remaining hut at Stobs Camp

An advertisement which appeared in December 1959 announcing the sale of huts and fitments at Stobs Camp four miles south of Hawick in the Scottish Borders heralded the end of a bleak, desolate spot where young men trained for war and others spent their time behind barbed wire.

Preparations for the arrival of the first troops began in the spring of 1903 and a railway siding, connecting with the main Edinburgh to Carlisle line, was constructed. Rifle ranges and parade grounds were laid out and the first troops, some 20,000, all volunteers arrived for their summer manoeuvres.

The Black Watch in a Pentecostal Mission

Squaddies roughed it under canvas while officers relaxed in more comfortable quarters.  There were however so many troops that that some had to be billeted in Hawick. The Black Watch found themselves in a Pentecostal mission, while the Ayrshire Yeomanry and their horses were encamped in a nearby public park.

Some of Hawick’s residents welcomed the camp, particularly the traders and shopkeepers who looked forward to an upswing in sales. Others were unhappy about the arrival of so many men from outside the region and were concerned about the effect on ancient traditions.

In a bid to stop these perceived erosions of old, established customs the Callants Club was formed by a dozen townsfolk whose goal was, “The cultivation of local sentiment, the preservation of ancient customs and institutions of the town of Hawick and of its history and traditions and the perpetuation of the memories of worthy townsmen.” However, troop numbers continued to grow and the local paper, noted in July 1907, “That a route march took place in town with the mounted infantry leading the way…”

The growing threat of war led to the construction of more buildings and the training ground at the camp was used all year round. When war was finally declared the authorities decided that the area would also be used to house prisoners of war.

Defence of the Realm Act

A hundred wooden huts plus dining rooms were built to accommodate 6,000 prisoners.  Such was the curiosity value to locals that they would congregate in droves forcing the government to issue an order under the Defence of the Realm Act forbidding the public from coming within a quarter of a mile of the camp.

In the spring of 1915, German prisoners, including some sailors who had been captured after engagements in the North Sea began arriving.  Later inmates included 150 civilians of German extraction, many who had left business behind in the north of England to give themselves up for their own protection after protestors had vandalised their properties. They were kept busy carrying out building and maintenance duties while work parties were sent to labour on local farms.

As well as British forces, allied soldiers were also sent to Stobs for training.  Included in that number was Frank Lind of the Newfoundland Regiment who wrote home with this description, “Our tent is number 21 and we have a nice crowd, just a dozen. We have lots of music, tin whistles, mouth organs and gramophone records and as soon as we get room we will put in a small organ even if we have to move the wash stand and dinner table out to make room for it and then we can enjoy the evening in fine style.”

Throughout these years there were a number of escape attempts but few examples of prisoners actually being set free. However, in July 1915, the crew of a German steamer, sailing inside Norwegian territorial waters, surrendered to a British patrol boat.  The crew were removed before their vessel was sunk by shellfire: but their capture, so close to the shore, was deemed by the British to be an ‘irregular proceeding’ and the prisoners were subsequently released from Stobs and returned through Holland back to Germany.  Apparently, the age of chivalry in war was not yet dead.

In April 1916, a camp inspection was carried out by a member of staff of the German Division of the American Embassy in London who noted that the military prisoners were all German but the civilians were Austrians and Turks; sleeping accommodation was satisfactory and there was even hot and cold running water. The infirmary had six wards with 24 beds in each and housed 65 patients suffering a wide variety of ailments including nerve disorders, colds, wounds and tuberculosis.

There were more than 500 prisoners involved in road-making and others engaged in shoemaking; an educational establishment catered for studies and lectures while leisure facilities included concerts and theatrical events.

From the Scottish Borders to the Somme

The Newfoundland Regiment left the relative comfort of the Borders for the Somme where they were decimated by enemy machine gunners. The official report written by the divisional commander spoke of a, “magnificent display of trained and disciplined valour” which nevertheless failed in its objectives.  Among the dead was Frank Lind.

Back at Stobs there were musicians among the prisoners and the local YMCA donated instruments which enabled them to form an orchestra.  There concerts included the resident singers known as the Caged Birds.  Orchestral works by Wagner proved popular.

More stories from the Scottish Borders

A camp newspaper was started, copies of which were sent back, via the Red Cross, to Germany. However, during the winter there was little to do for the inmates except to huddle round hot stoves and reminisce about home.

After the end of hostilities, the last of the prisoners left in 1919 but the camp remained open for training purposes and was used as such, with new Nissan huts end electricity generators, during the Second World War.

In August 1962 the 36 soldiers and six civilians who died, over the decades, at the camp were disinterred and taken to the military cemetery at Cannock Chase in Staffordshire.

A last sobering thought was left to one of the many young men who came through the camp gates. He wrote: 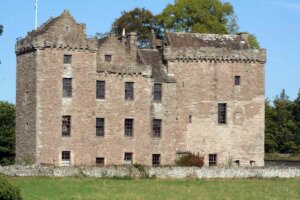 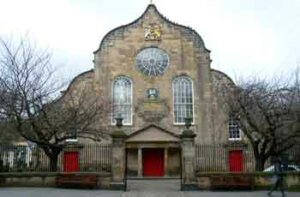 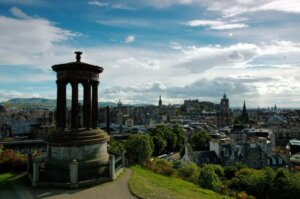 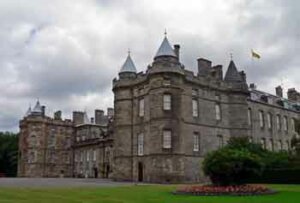 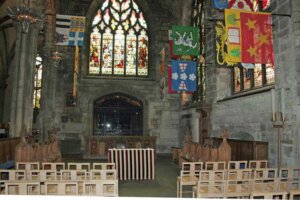