Among the buildings within the Stirling Castle complex is the glorious Royal Palace, built by James V for his queen, Mary of Guise. 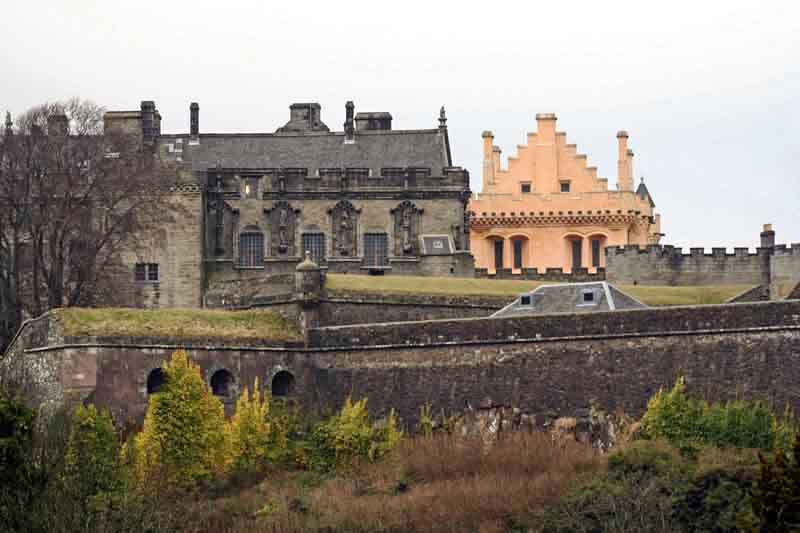 James began work in 1538 but it was probably completed, after his death in 1542, by his widow who continued to live there.

It was once home to their infant daughter Mary Queen of Scots who not only spent some of her young life there but also when she returned from France in 1561 to take the throne.

The palace continued to function as an important royal residence from the 16th century until 1603 and the Union of the Crowns when James VI and his court moved to London. Certainly by the time Charles I had died the building was no longer used as a royal residence.

By the 18th century, during the reign of Queen Anne the building was converted for military use.  It was 1964 when the army, the Argyll and Sutherland Highlanders, finally left.

Transformation of Stirling Castle into a visitor attraction

The military departure marked the slow transformation of Stirling Castle into a visitor attraction. By the year 2000 the decision was made to recreate the interior of the palace as it was in the 16th century.  At that point there were almost no original features remaining.

Following the completion of restoration work in 2011 visitors can now admire the splendour of the palace probably the most impressive renaissance building still in existence in Scotland.

The restoration of six royal apartments, three on the king’s side and three on the queen’s side, within the palace, brought the building to life.

The decoration and furnishings were faithfully replicated thanks to the availability of a number of primary sources which had never before been fully analysed. Important also was the detailed investigation carried out between 2003 and 2005 along with the wider historical research from the UK and throughout Europe.

Of particular note is the ceiling in the king’s inner hall which is decorated with the newly created Stirling Heads, the originals of which date to the 16th century. The king’s inner hall or presence chamber was a particularly important room which would have acted as a throne room where only the most important people were allowed to enter.

The Stirling Heads are metre wide hand-carved oak medallions and display images of classical figures and past kings and queens.

The exciting news is that over 30 of the originals still survive and have their own display in a specially created gallery on the upper floor of the palace.

Interestingly scientists dating the age of the wood used found that it came from forests in what is now modern Poland at a point between 1530 and 1544. While the artists who carved them cannot be named there is evidence of both French and Scottish involvement.

One of the Heads has carvings which experts believe are the oldest surviving of Scottish instrumental music. Was it specially composed for James V?

Part of the restoration project was the recreation of the unicorn tapestries of James V. An inventory of 1539 records about 100 themed tapestries – Old Testament, hunt of the unicorn and stories of love among them. They now hang in the queen’s inner hall.

A powerful reminder of the life of Mary of Guise is the impressive triptych which features the Madonna and Child with St Cecelia and St Clare on the wings. This piece was lovingly crafted by a local Leith artist and is displayed in the queen’s bedchamber.

Entrance to the Royal Palace is included with the Stirling Castle ticket price.