Home » Things to do in Edinburgh » Edinburgh Castle » Mons Meg

Mons Meg was made in Belgium in 1449 for James II. 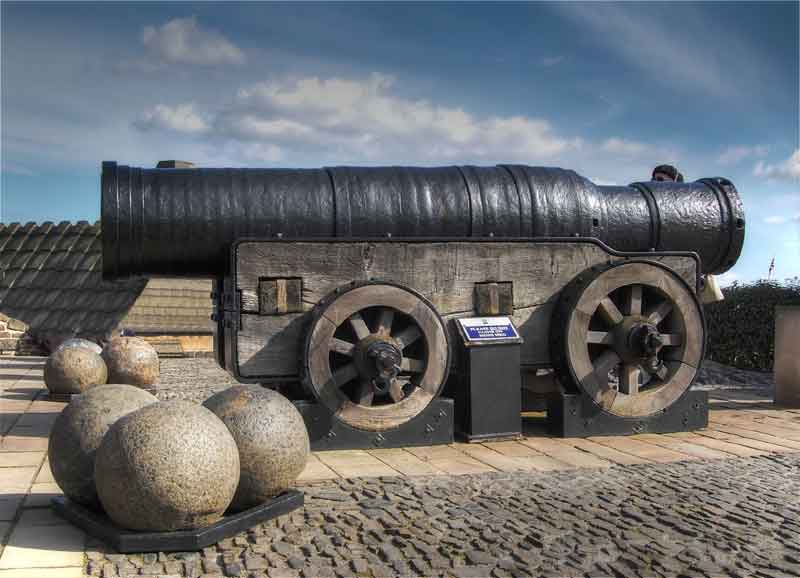 Mons Meg is a six-tonne, 13ft 4in in length, medieval siege cannon which in its day had a range of almost two miles. This magnificent piece of ordnance stands close to St Margaret’s Chapel, on the Upper Ward of Edinburgh Castle.

A gift for James II of Scotland

The cannon, originally known simply as Mons after the Belgian town where it was made in 1449, was a gift from Duke Philip of Burgundy to King James II of Scotland.

Mons Meg was used in a number of military campaigns.  It was in action during the Siege of Roxburgh Castle in 1460, a Borders skirmish where James II died after another cannon exploded close to him. James IV brought it to the field at the Siege of Norham Castle in 1497.

It may also have been aboard the Great Michael, for a time the largest warship in Europe, built by James IV and launched in 1511.

The cannon was a large cumbersome object to move requiring around 100 men to haul it on average around three miles a day. This may well have contributed to its removal from military service around 1550, thereafter to be used as a ceremonial gun.

It was most famously fired in April 1558 to celebrate the marriage of Mary Queen of Scots and Francis the young heir to the French crown.

Mons Meg was last fired in October 1681, in a birthday tribute for the Duke of Albany, later King James VII. When the barrel burst, this aging piece of ordnance was abandoned in the Cartshed, now the castle restaurant.

It was taken to the Tower of London in 1754 following the Jacobite uprising and the subsequent Disarming Act and was only returned to Scotland in 1829 after intense lobbying by Sir Walter Scott and the Society of Antiquities.