History of the University of Glasgow

The fourth oldest university in the English speaking world 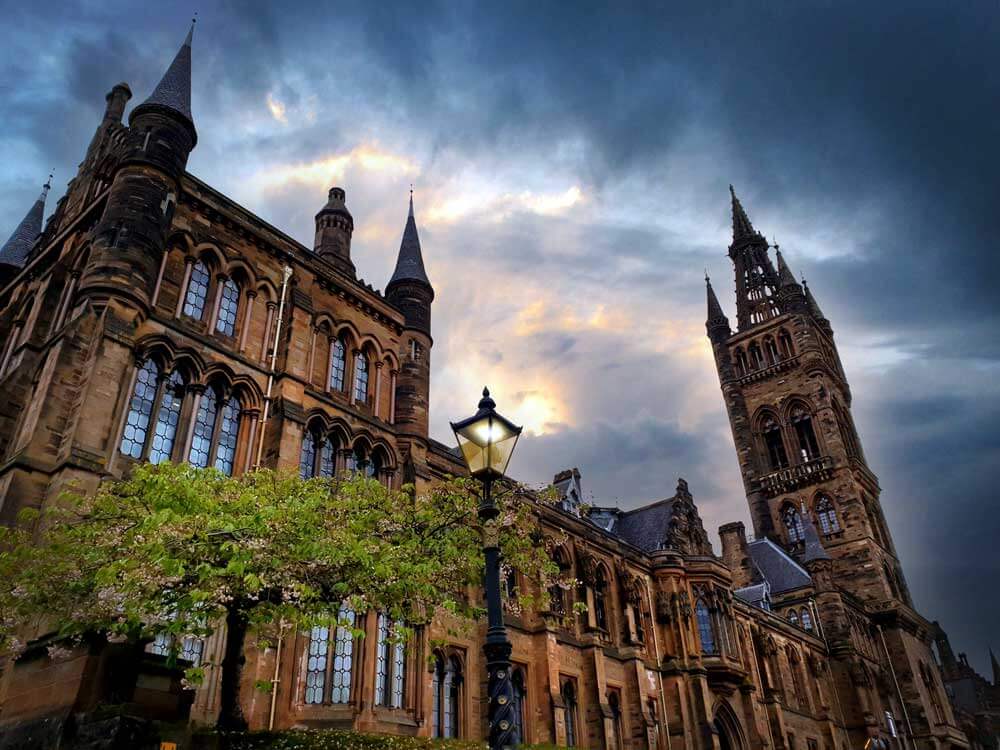 William Turnbull founded the University of Glasgow in 1451

The inspiration for the University of Glasgow came from the Bologna, and its ancient university, the oldest in the western world.

While motivation came from overseas, the story behind the founding of the University of Glasgow came from a Scottish Borders man. William Turnbull was a man with an impressive pedigree – a man with royal connections.

He was an adviser and royal secretary to James II and keeper of the Privy Seal from 1400 to 1448. Turnbull had an MA degree from the University of St Andrews and was a student of canon law at the University of Louvain in Belgium. Most importantly he was also Bishop of Glasgow from 1448 until his death in 1454.

Historian John Durkan attests to the close relationship between Turnbull and the king when he says, “The king showered Glasgow with favours.”

It was Turnbull who convinced King James to ask the Pope to establish a university in Glasgow. Sadly, his original petition has been lost.

However, many scholars believe that the request was inspired by Turnbull’s desire to increase his personal status in the community and his desire to give the See of Glasgow the same standing as that of St Andrews.

Woodman confirms this by saying, “The bishop-founders no doubt revelled in the personal prestige that erecting institutes of higher learning bestowed on them.”

One incident later documented by John Law, a canon of St Andrews,said that Turnbull was implicated in the murder of William Douglas, 8th Earl of Douglas in February 1452.

In the early years of the university, lectures were held in Glasgow Cathedral’s lower church and the nearby Dominican priory. Indeed, throughout the first hundred years of its existence, the university enjoyed a close relationship with the cathedral and played an important part in church reform.

At first only undergraduate arts degrees were obtainable at Glasgow. Teaching was carried out by regents who took their students through the entire period of study in all subjects.

Only students in the Master of Arts programme were deemed official members of the university with the right to vote in the election of the chancellor.

A letter from Mary Queen of Scots

Following the Reformation of 1560, the university was in terrible condition. Most of the catholic staff were forced to flee, student numbers decreased and many of the buildings were in a dilapidated state.

A letter written by Mary Queen of Scots to the university reveals her shock at the “half built” schools and buildings.

What’s more the university chancellor Archbishop James Beaton, a confidant and supporter of Mary had also left for the safety of France.

He took with him some of the valuables belonging to Glasgow Cathedral and the university including the precious Bull from Pope Nicholas V and the mace, a symbol of the university’s academic authority.

While the mace was returned some years later, the Papal Bull was never seen again. Despite its loss it remains the authority by which the university awards its degrees.

Andrew Melville, a Scottish scholar, theologian and religious reformer who studied at the University of St Andrews was a towering figure in Glasgow’s development.

After a number of years spent on the continent, he returned to Scotland in the summer of 1574 and encouraged by Archbishop Boyd, the university’s chancellor, he accepted the post of Principal of the University of Glasgow.

Melville revitalised teaching methods, scrapping the outdated system of regenting and replacing it with specialist teaching.

The curriculum was streamlined, with the introduction of Ramist logic, rhetoric, geometry and arithmetic.

Melville had been one of the figures of the Reformation and was the Moderator of the General assembly of the Church of Scotland.

Melville also oversaw the issuance of a much needed new charter, the Nova Erectio granted by James VI in 1577.

While there is no doubting the impressive nature of his work, which should never be undervalued, the analysis clearly shows the importance of the state, church and local officials contributed to the rise in the university’s fortunes.

Despite the essential help of the king, Melville remained hostile to royal involvement, on one occasion unwisely describing the king as, God’s sillie vassal.” In 1606 he was imprisoned in the Tower of London for five years and then banned from returning to Scotland after his release. He died in France in 1622.

By the beginning of the 18th century, student numbers increased to around 400 and within 30 years, seven professorships were either created or restored.

Law became a recognised faculty with its own chair and botany, zoology and chemistry became part of the faculty of medicine.

The Scottish Enlightenment was an extraordinary period of intellectual activity that took place in the second half of the 18th century. Because of Edinburgh’s leading role, it is sometimes mistakenly believed that the movement was centred solely on the Scottish capital.

But not so. The cities of Glasgow and Aberdeen produced their own men of genius. Indeed, there is a solid argument to be made that puts Glasgow at the very beginning of this remarkable period in Scotland’s history.

The opening salvo might well have been the publication of Francis Hutcheson’s Inquiry into the Ideas of Beauty and Virtue in 1724.

Hutcheson, an Ulsterman, was the chair of moral philosophy at the University of Glasgow from 1730 to 1746. He introduced lectures in English rather than Latin.

His substantial influence spread far beyond the confines of Scottish academia with his work being taught thousands of miles away at American universities.

Occupying the chair of moral philosophy after Hutcheson were other pillars of the Enlightenment. Thomas Cragie in 1743 and then Adam Smith the distinguished historian, philosopher and political economist.

Today Smith’s contribution to the university is widely remembered thanks to a building, library, chair and research foundation named in his honour.

The University of Glasgow attracted a wide range of talented men – and eventually women.

Sir James Dalrymple was both a graduate and regent from 1641-1647. Dalrymple’s treatise, The Institutions of the Law of Scotland provided the basis for Scots law.

Joseph Black, a leading Enlightenment figure, was a lecturer in chemistry, a professor of anatomy and botany and a regius professor in the practice of medicine from 1757 until 1766. He is best remembered for his discovery of carbon dioxide.

Among the many students who made their career elsewhere was writer and Lawyer James Boswell who attended Adam Smith’s classes in 1759. John Buchan, writer, barrister, member of parliament and polymath studied during the 1890s.

As distinguished as they all were, they were only a few of the many thousands who earned their places in this grand old ‘stadium generale’.

Women have only been allowed to study at Scottish universities since 1892.

The University of Glasgow’s new home

Towards the end of the 19th century, the High Street buildings were no longer fit for purpose so the university moved west to a new home in Gilmourhill where it still has one of its three main campuses.

Today expansion continues at Gilmourhill and in the process, the University of Glasgow has become one of the world’s leading universities with around 29,000 undergraduate and postgraduate students from over 140 countries worldwide.