Home » Things to do in Edinburgh » Royal Yacht Britannia

Once home to her majesty the queen now moored at Leith, Edinburgh 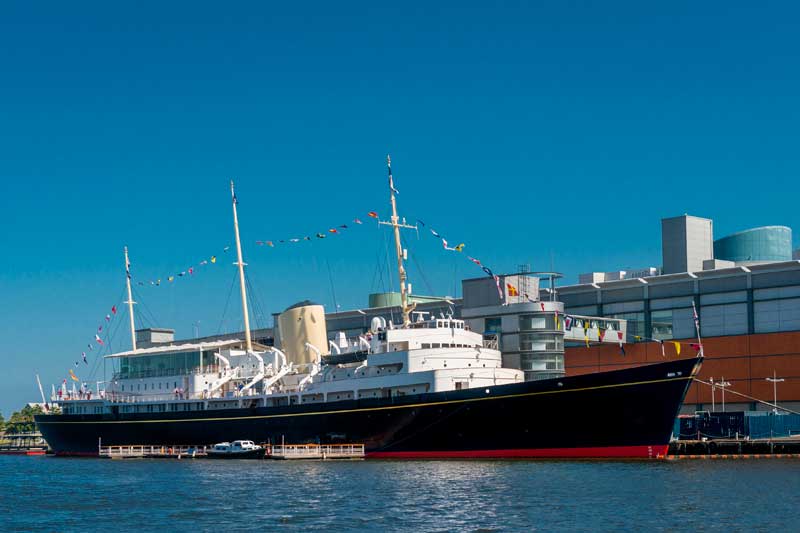 The Royal Yacht Britannia was, for over 40 years, the floating home of Her Majesty the Queen and other members of the British royal family.

As they travelled the world it was, said the queen, the one place she could truly relax.

Today the world’s most famous yacht is an Edinburgh five-star visitor attraction and exclusive events venue.

Where is the Royal Yacht Britannia berthed?

The Britannia is berthed in Leith, the Port of Edinburgh at:
Ocean Terminal
Leith
Edinburgh EH6 6JJ

Where was the yacht built?

It was built in John Brown’s shipyard in Clydebank, Scotland and launched on 16 April 1953. The ship was commissioned into the Royal Navy the following year.

Other than to transport the British royal family, did Britannia have any other functions?

Yes, the yacht also had a commercial function hosting British overseas trade missions which earned millions of pounds for the exchequer. It also hosted state visits and royal receptions.

Did the queen have a favourite place to relax on her yacht?

Yes, Her Majesty loved the Sun Lounge where she enjoyed breakfast every morning.

How much of the yacht can visitors see?

There are five decks to explore. Favourite places are the Admiral’s Quarters, Crew’s Quarters, Bridge, Engine Room and State Apartments.

Who owns the Britannia today?

The yacht is owned and managed by The Royal Yacht Britannia Trust which welcomes over 350,000 visitors onboard every year.

History of the Royal Yacht Britannia

Plans to build a new yacht to replace the ageing Victoria and Albert III had first been considered in 1938 during the reign of King George VI but in austere pre-war Britain, it didn’t seem appropriate. However in 1951, with the king’s health failing, the government decided to push ahead with their plans for a new ship. Sadly King George died before the work was completed.

Built on the River Clyde

Like two of the other great ocean-going passenger liners, the Queen Mary and Queen Elizabeth II, the royal yacht’s life began on the River Clyde in Glasgow in 1953.

It was the latest in a long line of royal yachts that stretched back to the seventeenth century when the Dutch gave the world’s first royal yacht Mary to Charles II as a gift.

Original designs of the ship had specified a dual role – a hospital ship to be used in times of conflict and a royal yacht. She was never used in the former capacity.

However, in 1986, during a voyage to Australia, without the Queen aboard, the ship diverted to Aden to help in the evacuation of those trapped on the beaches by an ongoing war in the region.

Over 1,000 terrified people were rescued and crammed into every available space on board.

Both the Queen and Prince Philip took a keen interest in the design of the vessel, working with Sir Hugh Casson on plans for the interior decorations. The young couple selected fabrics, furniture and paintings, many of them taken from the Victoria and Albert III in an effort to keep costs under control.

The state apartments aft of the funnel were not extravagantly decorated.  Instead, they have a traditional ‘country house’ feel, particularly in the drawing room where chintz covered armchairs and sofas sit on a plain silver-grey carpet overlaid by a magnificent Persian rug.

A baby grand piano stood in the corner often providing after-dinner entertainment. Princesses Diana, Margaret and Alexandra were all known to enjoy playing.

Singing for his supper

Writer Brian Hoey reminds us of the night Sir Noel Coward came to dinner during a Caribbean cruise. “He literally sang for his supper playing many of his own compositions into the wee small hours. Even on the royal yacht, there was no such thing as a free meal.”

‘Supper’ in the state dining room could be a splendid occasion. In preparation for a state banquet, Royal Navy stewards

would lay the burnished mahogany table with military precision. They would carefully place the floral decorations, candelabras and exquisite crystal wine glasses.

With a ruler in hand, they measured the precise position of each shining piece of silver cutlery. Menus were printed and seating plans were discussed before Britannia set sail.

The Queen and Prince Philip had their own bedrooms and sitting rooms, decorated to reflect their personal taste. The Queen preferred chintz and floral while the Duke liked wood panelling, a more functional style.

This elegant lady became a favourite with all generations of the royal family but particularly the Queen who always said it was the only place she could truly be at ease.

A young Princess Diana was happiest when proceedings were kept informal, she was a very special guest as far as the naval crew were concerned.

On one memorable occasion, she was found in the Junior Ratings Mess leading the crew, or yachtsmen, as they were called, in a rendition of What, Shall We Do With The Drunken Sailor.

One remark in particular sums up the feeling and affection the crew had for her.  “There are 275 men aboard and every one of them is in love with Princess Diana.”

It’s fitting that Prince William and Prince Harry, who often spent their summer holidays aboard, loved the freedom and privacy the royal yacht allowed them.

But it was more than a floating hotel.  It was an unofficial ambassador for Britain.  On what became known as Sea Days, it would throw open the doors to the world of commerce and let British businessmen promote their companies and products to the world.

The Overseas Trade Board estimated that between 1991 and 1995 the exchequer benefited to the tune of £3 billion.

In a long service, the ship sailed over one million nautical miles stopping at 600 ports in 135 countries. Britannia was finally decommissioned in Portsmouth on 11 December 1997.

At the Paying-Off CeremonyThe queen clearly sad at the occasion said : “Looking back over forty-four years we can all reflect with pride and gratitude upon this great ship which has served the country, the Royal Navy and my family with such distinction.”

WHAT ARE THE HIGHLIGHTS OF A VISIT TO THE ROYAL YACHT BRITANNIA?

If you’re visiting during the busiest periods and just turn up, the queues can be long, so be prepared for a wait. However, many of the available tour options will let you avoid queuing and you can book online.

But if you prefer to explore yourself, there are free audio guides in 30 languages to help you find your way around. A range of concession prices is also available.

For further information on admission times and help planning your visit, go to the Britannia website.