An introduction to the Speyside Scotch Whisky Region

Discover some of the most popular Speyside whisky distillery tours.

SPEYSIDE HAS SPECTACULAR SCENERY, FASCINATING HISTORY AND AN ABUNDANCE

It’s also the region with the greatest concentration of malt whisky distilleries in Scotland.

WHERE IS THE SPEYSIDE SCOTCH WHISKY REGION?

This glorious part of Scotland, peppered with lovely little towns and villages, is a region of whisky distilleries, whisky festivals and the Speyside Malt Whisky Trail. Way image

While it has the ‘water of life’ at its heart – it has the largest concentration of Scotch Whisky distilleries in Scotland – Speyside, a place of magnificent contrast, offers its visitors so much more.

With long-distance hiking trails, nature reserves and mountain paths there’s a chance to take a deep breath and enjoy the tranquillity of nature.

For Scottish history enthusiasts, this remarkable region still has signs of times long gone. There are reminders of Pictish life, Jacobite ambition and that the real King Macbeth, who ruled Scotland (Alba) c. 1040-1057, had passed this way. There are, once mighty, castles, cathedrals and other historic places to discover.

James Fleming, banker, philanthropist and driving force behind a number of community projects, founded the present Aberlour Distillery in 1879, a short distance from the original which was destroyed by fire.

Over time, a series of owners have gradually modernised and expanded the business, enabling greater capacity, currently about 3.8m LPA.

Until the late 19th century the distillery was powered entirely by water from St Drostan’s Well, named after a legendary figure who may have been a member of the royal family of Dál Riata and a follower of St Columba. Today it uses water, pure and soft, that flows from the slopes of Ben Rinnes.

While Aberlour Distillery produces a number of exclusive bottlings, particularly for the French market, their core range includes 12, 16 and 18 year olds, generally double matured in a combination of American oak barrels and Oloroso sherry casks. Before use, each cask is individually nosed. The barley it uses to produce all its single malts is grown locally.

Each February, to mark the start of the salmon fishing season and to encourage a good catch for the locals, a bottle of Aberlour 12 Year Old is poured into the River Spey at the Penny Bridge (Victoria Bridge). Founder James Fleming built this category A listed footbridge after a young boy drowned in the river. Aberlour calls it its, “long-standing legacy.”

Aberlour opened a new visitor centre in 2002. The visitor experience includes a daily range of tours and tastings, which according to the distillery, “allow you to discover Aberlour’s commitment to Double Cask Maturation.”

In 1869, (Big) John Smith, one of the most knowledgeable distillers of his time, founded Cragganmore Distillery. Built close to the new Strathspey railway line, it allowed the company to more easily bring in equipment and raw materials and dispatch the finished product.

The distillery remained in the Smith family until 1923. Since then a number of owners have taken control. However, like many other distilleries, Cragganmore closed during both world wars. The current owners are Diageo.

The mineral-rich water source is the Craggan Burn, filled from a spring on Craggan More Hill. Lightly peated malt comes from various Scottish sources and the product matures in a mix of refill ex-sherry and ex-bourbon casks. The capacity is 2.2m LPA.

Cragganmore one of Speyside’s smaller distilleries produces, according to the company, “The sweetest, most complex of all malt whiskies.”

While its single malt is an important part of a number of blended whiskies it has a small core range consisting of a 12 Year Old and a Distiller’s Edition. In addition, a number of innovative special releases, with and without age statements, have regularly come to market.

Visitors can learn more about the distillery and duty-free warehouse on a number of tours while the very special Cragganmore Clubroom is the venue for tastings and nosings. However, the jury is out on whether the clubroom furnishings are Victorian or Edwardian. But whatever the answer they are very plush indeed, for many the highlight of the visitor experience.

Glenfarclas, from the Gaelic ‘valley of the green grassland’, stands at the foot of Ben Rinnes, a well-known Speyside landmark and about four miles west of Aberlour.

It was farmer Robert Hay who founded the distillery in 1836, on the site of an existing illicit still. But since 1865, beginning with John Grant a local cattle breeder, just one family, the Grants of Glenfarclas have owned and operated the business. Given the continuity, it’s perhaps not surprising that traditional methods remain important to them.

The water comes from springs on Ben Rinnes, lightly peated malt is sourced from a number of suppliers and the capacity is 3.5m LPA.

Among its Aged Range are 8, 10, 12 and 15 year old single malts. There is also the 105 Cask Strength and the Family Cask Range. From time to time the company will also introduce Special editions and exclusives. “It’s the best quality Highland Single Malt Whisky, in the traditional Speyside style,” said the family.

In 1973, they built one of the first distillery visitor centres in Scotland. They have also modelled their remarkable tasting room on the stateroom of RMS Empress of Australia, it’s a rather splendid place to enjoy a dram. A number of tours cater for the novice and the connoisseur.

The new Macallan Distillery and visitor centre, set at the heart of the Macallan Estate in Speyside, is, as they say, a bit special. This striking example of modern architecture, opened in 2018, has an undulating roof topped with turf and meadow flowers carefully designed to blend in with the surrounding hillside.

The interior of the Macallan Distillery is a juxtaposition of state-of-the-art production equipment and traditional methods, a combination designed to ensure that the spirit is identical to the one produced by the previous distillery.

This extraordinary edifice is the latest incarnation of the one that Alexander Reid opened in 1824. Edrington, the current owner of the business invested £140 million in the project.

The water comes from boreholes on the estate, unpeated malt comes from Scottish sources and the new distillery has the capacity to make an estimated 15m LPA.

Unsurprisingly its core range, both innovative and extensive consists of a number of Styles. Among them Sherry Oak, Double Cask and Triple Cask Matured. There is also an abundance of special releases, limited editions and Travel Retail Exclusives.

Visitors to the distillery are invited to join one, or more of a range of ‘experiences’ designed to lead them through the company’s history, heritage and distillation process to discover what they call, “the foundation stones that underpin the character of The Macallan.”

There is also a rather grand boutique to browse, a brasserie serving the best Scottish produce and of course the ubiquitous distillery bar.

Setting out on the Malt Whisky Trail is a great way of exploring some of the region’s best-known whisky distilleries. There’s also a fascinating cooperage and a former distillery, now a museum. managed by Historic Environment Scotland.

On the Speyside Malt whisky trail are: 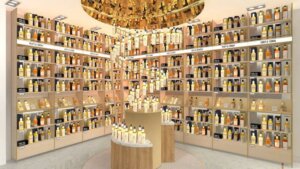