Home » Things to do in Edinburgh » Blackness Castle 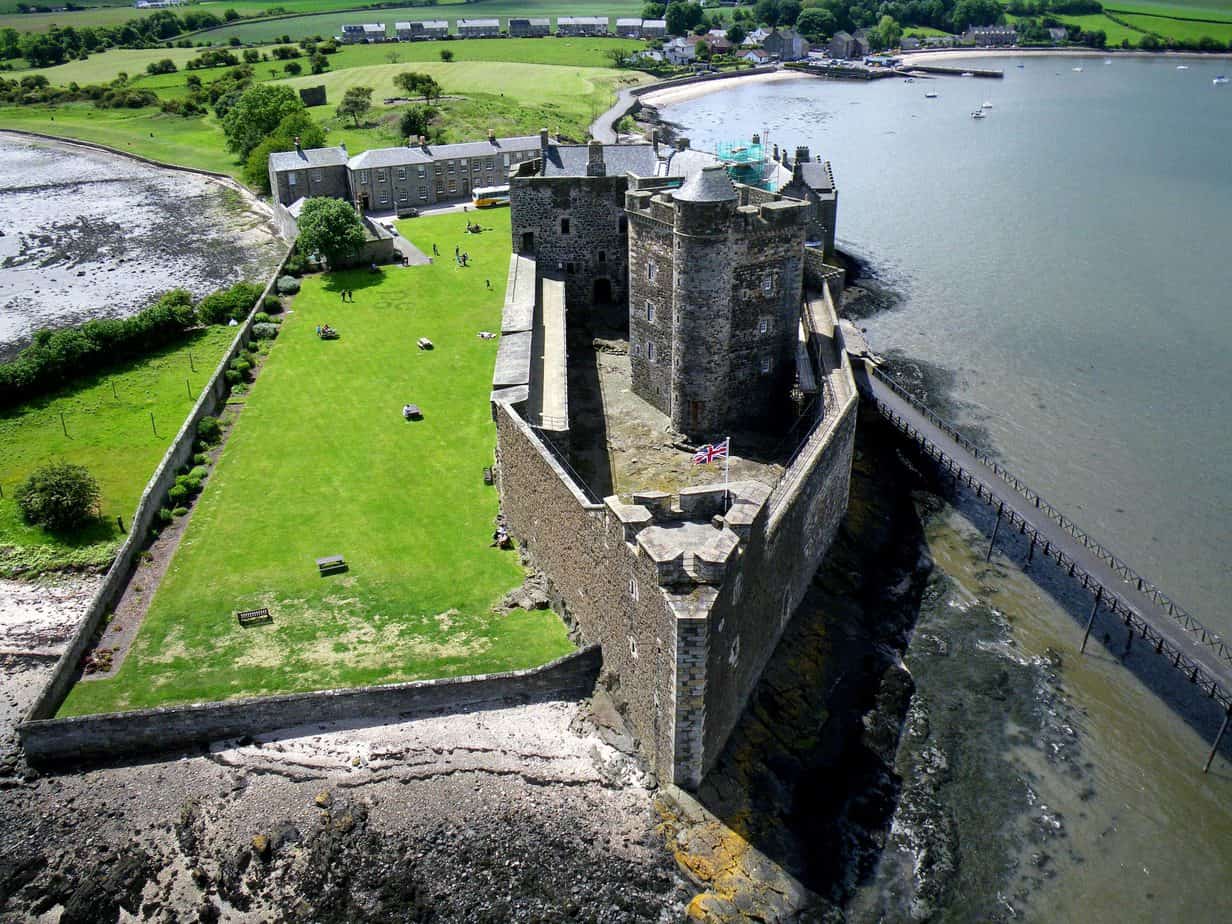 Blackness Castle, a Historic Environment Scotland (HES) property, stands on a rocky outcrop, on the south shores of the Firth of Forth, a few miles to the west of Edinburgh. The neighbouring small village of Blackness served as the port for the royal burgh of Linlithgow during the 11th century.

Thanks to Its unusual boat shape, when seen from the seaward side, the castle is often referred to as the “ship that never sailed.” Its three towers add to the nautical effect.

Jo Woolf, Writer in Residence at the Royal Scottish Geographical Society, described it as a, “glowering brute of a place, huge and forbidding…” It’s a description that sums it up perfectly.

Blackness Castle was built in the 1440s, perhaps on the site of an earlier fort, by Sir George Crichton, Admiral of Scotland and a member of one of Scotland’s most influential and politically astute families.

In 1453, the fortress and surrounding lands were ‘acquired’ for the crown by James II. For much of the next century, it served mainly as a prison.

In the mid-16th century, Scotland faced a threat from Henry VIII over his attempts to force the Scots to agree to the marriage between his son Edward to Mary Queen of Scots. It was a period that became known as the ‘Rough Wooing’. 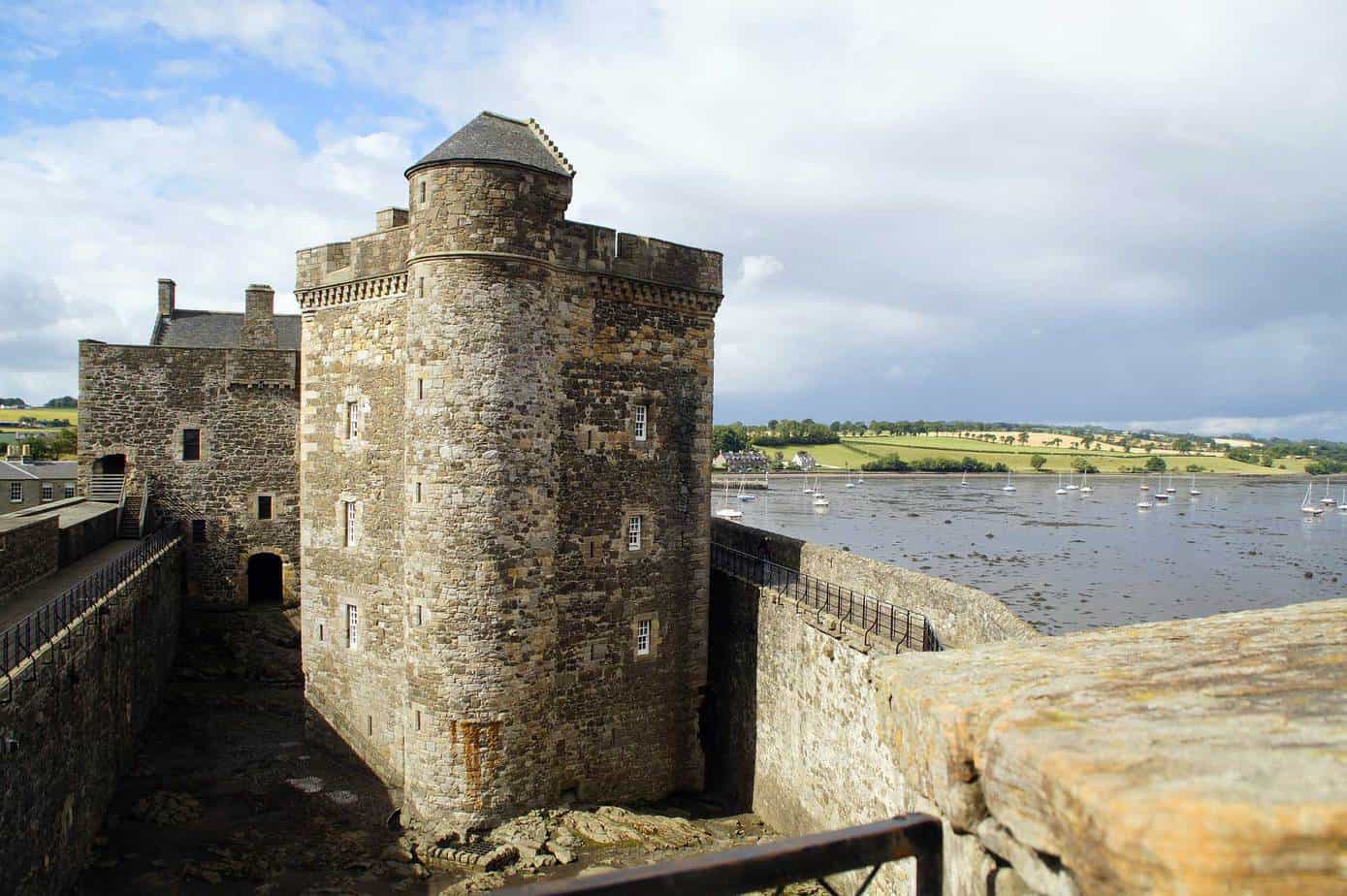 As part of the measures to counter that threat, James V appointed Sir James Hamilton of Finnart as Keeper of Blackness Castle. Hamilton began a major programme of refortification.

South-facing walls were strengthened to withstand cannon fire, with new gunports being added in the south tower and the east wall. Hamilton also moved the entrance from the more vulnerable east wall to the west wall.

The new entrance was protected by a caponier – a covered ditch within the external wall which allowed defenders to fire along that ditch should the outer gate be breached. The caponier at Blackness is one of only a few surviving in Scotland.

Hamilton was executed in 1540, for conspiracy to assassinate the king. His work was continued by others and completed three years later. Much of what remains today dates to this period.

Such was its new air of invincibility that Sir Ralph Sadler, English ambassador to Scotland reportedly told Henry VIII that Blackness was impregnable.

In the same year that the reconstruction was completed, Cardinal David Beaton of St Andrews and regent to the infant Mary Queen of Scots. became one of the many prisoners incarcerated in this grim fortress.

During this time the castle was used as the main ammunition depot for a combined French and Scottish army.

In 1548, France’s Henry II agreed to further military support for Scotland. Both Dunbar and Blackness Castles were subsequently garrisoned by French soldiers.

In 1651, there was further work to strengthen the east curtain wall and the southern tower. Despite this, the castle fell to General Monck, military commander of Oliver Cromwell’s forces after a bombardment from land and sea.

Nearby the remains of a small chapel dedicated to St Ninian are a forlorn sight – demolished all these years ago by Monck’s gunners as they sought the best place for their gun batteries.

The castle was repaired following the Restoration of Charles II in 1660. Alterations were made to the central tower enabling it to hold Covenanter prisoners. The nearby Bass Rock and Dunnottar Castle were also used to house Covenanters.

These were the ‘Killing Times’ when supporters of the National Covenant rose in opposition to the interference by Stuart kings in the Presbyterian church.

Following the Act of Union in 1707, Blackness was one of four castles to remain garrisoned by the British Army in order to protect Lowland Scotland from Highland attack. The others were, Dumbarton Edinburgh and Stirling.

In the same year, the castle turned from state prison to military base with new barracks and storage facilities constructed.

During the 18th and 19th centuries, the castle was used to hold prisoners from Britain’s wars with America, France and Spain.

At the outbreak of World War I, the British Army moved in once again, remaining until 1919 when it reverted to state control.

In the following years yet more restoration was carried out. During the work, an iron manacle was found in the notorious pit-prison still closed around the wrist of an unknown prisoner.

Today Blackness Castle is a Historic Environment Scotland (HES) property and is open to the public.

Blackness Castle doubled as the Palace of Holyroodhouse in the 2018 film Mary Queen of Scots starring Margot Robbie and Saoirse Ronan. It also played a part in Ivanhoe, Macbeth and Hamlet.

Like many of Scotland’s historic buildings, Blackness Castle has played its part in the Outlander saga with its courtyard used as the setting for Jamie’s whipping at the hands of Black Jack Randall.

How to get to Blackness Castle

Blackness Castle, around 15 miles from Edinburgh Castle is reached by road through the village of Blackness or alternatively by the coastal path from Bo’ness.

The path, with impressive views over the Firth of Forth, and its three bridges, is part of the John Muir Way, a 134-mile route that runs from Helensburgh to John Muir’s birthplace in Dunbar.

For further information on admission times and help planning your visit, go to the HES website.