Home » Things to do in Edinburgh » Dunbar's Close Garden 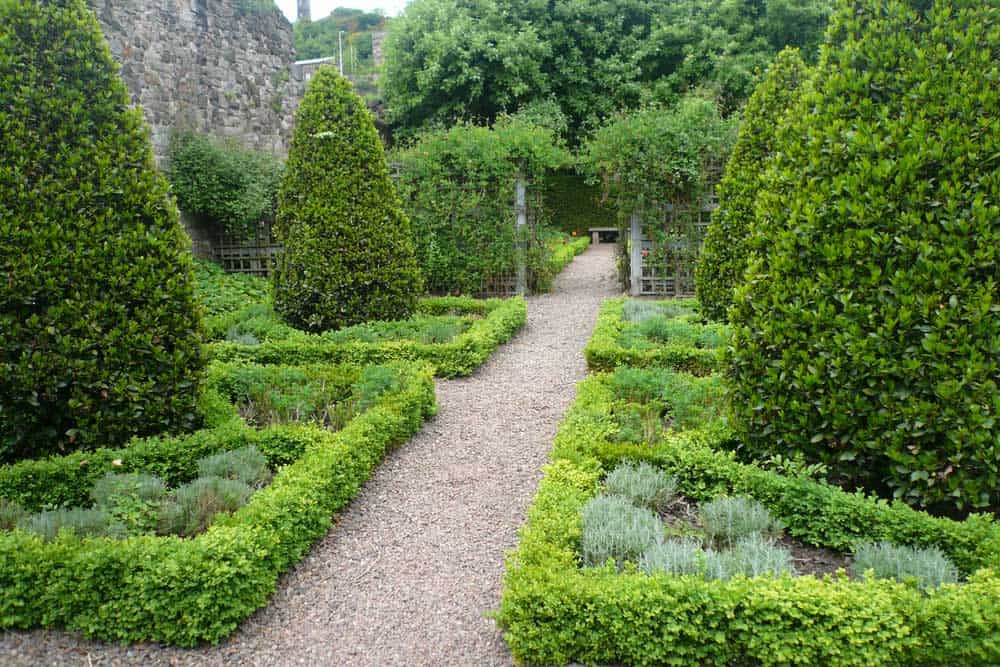 Dunbar’s Close Garden, a wonderful oasis of peace, lies just a few steps from the busy Canongate on Edinburgh’s Royal Mile. Although not laid out until the 1970s, it has the design and character of a 17th century garden. A number of benches provide the perfect place to sit, relax and draw breath.

Just a few steps through Dunbar Close (entrance to the garden) will take you to this delightful walled garden, which many visitors to Edinburgh, not knowing of its existence, will simply walk past.

Designed by landscape architect Seamus Filor, the garden was gifted to the City of Edinburgh in 1978 and is now maintained by the Parks Department.

Dunbar Close Garden is divided, by neat gravel paths, into eight separate areas, or garden rooms separated by hedges and trellises, and filled with plants.

To ensure 17th century authenticity, as much as possible, the vast majority of the plants and shrubbery would have been available in the 17th century. Among them: lavender, fig, rosemary, tulip trees and other herbs and fruit trees.

Probably named after Edinburgh writer David Dunbar who, in 1773, owned nearby properties, the designer Seamus Filor was influenced by a number of factors including:

Dunbar Close Garden is managed by the Mushroom Trust, a Scottish charity that supports the creation and development of green spaces and city environments. The trust said, “it wished to create a ‘pocket garden’ where passers-by could escape for a time the strains and pressures of their busy urban lives…

Digressing just a little, a number of writers note that Dunbar’s Close stood near Mrs Love’s Oyster Cellar an establishment that Robert Burns was known to visit.

Oysters were apparently very popular in 17th century Edinburgh. Testament to that was the discovery, by workmen, of an entire wall of oyster shells in what is now Gladstone’s land, a visitor attraction also on the Royal Mile.

What are closes in Edinburgh?

Edinburgh’s Old Town closes are described by Edinburgh World Heritage as, “steep, narrow alleyways.” Today there are dozens of them scattered around the Royal Mile and nearby streets.

However, turn the clock back and you’ll discover that some had an unsavoury history, particularly during the 16th and 17th centuries when decay and overcrowding were the norm.

For history enthusiasts the story of Edinburgh’s closes is fascinating. A few examples are:

How to find Dunbar Close Garden

The entrance to the close is just a few yards past Canongate Kirk on the left-hand side of the Royal Mile heading for the Palace of Holyroodhouse.

Other things to do on the Royal Mile