Home » Things to do in Edinburgh » Gladstone's Land 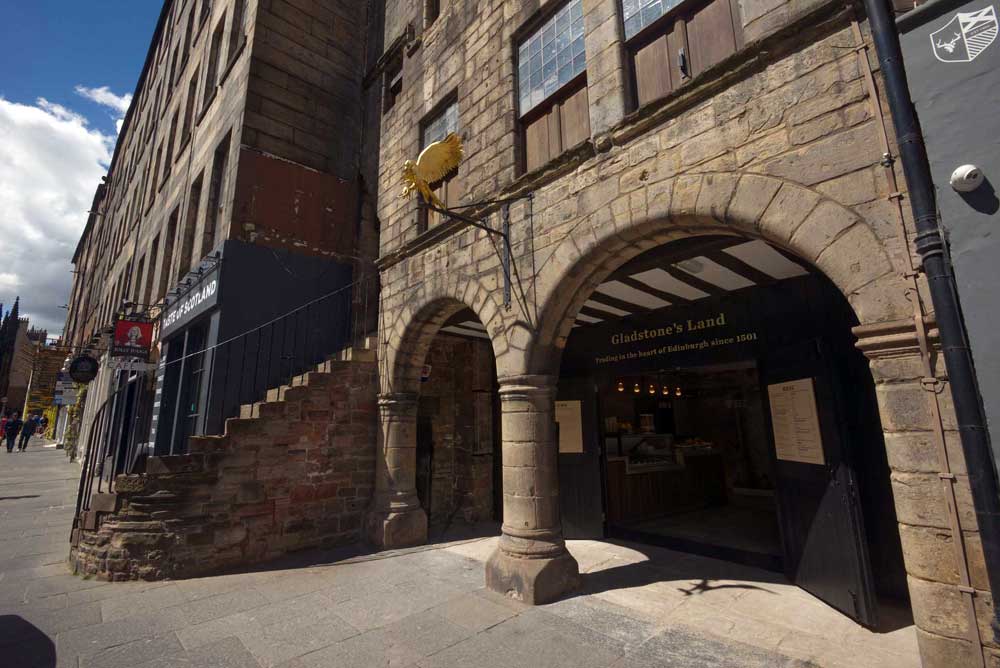 Gladstone’s Land, a National Trust for Scotland (NTS) property stands on Edinburgh’s Lawnmarket, part of the Royal Mile which runs from Edinburgh Castle to the Palace of Holyroodhouse. The story of its development is an indelible part of Edinburgh’s history.

Records tell us that a building stood on the site, possibly as early as 1501. However, the current seven-storey (including cellar and attic) building takes its name from Thomas Gledstanes (Glaidstaines), burgess and guild-brother of Edinburgh. Gledstanes and his wife Bessie Cunningham acquired and developed the property between 1617 and 1620.

Gladstone’s Land, one of the oldest buildings in the Old Town – the last with an arcaded front – has long been one of Edinburgh’s most popular visitor attractions.

Now, after extensive restoration, this wonderful living museum offers visitors a captivating glimpse into 500 years of the Scottish capital’s social and economic history. For the historical sleuth, there are some exquisite reminders of times long past.

What’s different in Gladstone’s Land after the renovations?

There are plenty of highlights. Before the renovation, many of the displays focused on the life of Thomas Gledstanes. Now the lives of other residents are being revealed – John Riddoch, John Sumervaill and Mary Wilson among them.

These new, fascinating stories of life on Lawnmarket have only been possible thanks to the detailed research by historians over several years prior to the renovations.

John Riddoch a wealthy 17th century merchant had a grocers shop on the ground floor. Using information from his will, NTS has recreated his stockroom which would have stored all manner of goods, among them a variety of spices, herbal remedies and other concoctions. Some of them were specifically designed to ward off the plague.

This story on Truly Edinburgh tells the story of the nearby Mary King’s Close during the great Edinburgh plague of 1645 which ravaged much of the Old Town, killing thousands of people in the process.

John Sumervaill was a merchant and burgess of Edinburgh, who lived in Gladstone’s Land at the end of the 17th century.

He was a subscriber, or Adventurer, as they were known, to the Company of Scotland which organised the Darien Scheme, a failed attempt to establish a colony – New Edinburgh – in Panama, Central America.

The scheme was a complete disaster almost forcing Scotland into bankruptcy. The Darien Scheme or Darien Disaster as it became known completely changed the course of Scotland’s history.

The renovations have created space for an early 20th century boarding house, inspired by Mary Wilson who in 1911 offered a room in her house for rent. Her advertisement asked for, “two or three respectable men.”

At street level, a new ice cream parlour has been created, inspired by flavours on sale in Edinburgh in the early 1900s. There is of course a coffee shop too.

Room to rent at Gladstone’s Land

The addition of self-catering apartments on the upper floor continues the rooms to rent theme and brings Gladstone’s Land into the 21st century.

For many one of the most important aspects of the museum will be the immersive sensory experience – visitors can touch exhibits, sit on chairs, open drawers and cupboard doors to peer inside – there is a distinct absence of ‘do not touch’ signs.

Tours of the building can be self-guided with the support, if needed, of the knowledgeable room guides or taken with one of the experienced tour guides.

Specialist tours are indeed a bit special. Tables Through Time Tour, “tells the story of changing tastes in food in Edinburgh’s Old town and the impact of trade, class and fashion on people’s diets.” Tastings are included.

The tour is based on the lives of three women who lived in Gladstone’s Land and the part food played in their lives.

The Intimate Lives Tour, not for the easily embarrassed, “looks at the history of sex and desire in Edinburgh’s Old Town…”

For further details on admission times and help planning your visit, go to the NTS website.

Gladstone’s Land was scheduled for demolition in the 1930s as Edinburgh civic authorities sought to sweep away a number of derelict properties. Thankfully the National Trust for Scotland stepped in to manage the property.

Lawnmarket, originally Land Market, a market for ‘inland merchandise’ (from other parts of the burgh) was once crowded with the stalls of linen sellers. King James II established a cloth market here in 1477.

During the 16th and 17th centuries, the Royal Mile was lined with ‘towering tenements” the risk of fire or collapse was very real. In 1861, for example, a seven-storey building, thought to be at least 250 years old, came crashing down killing 35 people.

People from all social classes lived in the same tenement building although those with a higher status lived on the upper floors further from the squalor on the streets.

By the early 19th century Edinburgh’s richer citizens were leaving the overcrowded Old Town for the more salubrious setting of the spacious and much grander surroundings of Edinburgh’s New Town.

Today the NTS owns the Georgian House, a property in the New Town’s Charlotte Square now restored to show a typical house of the 18th and 19th centuries.