Home » Things to do in Edinburgh » National Galleries of Scotland

TOGETHER THE galleries DISPLAY SCOTLAND’S NATIONAL COLLECTION OF SCOTTISH AND INTERNATIONAL ART. 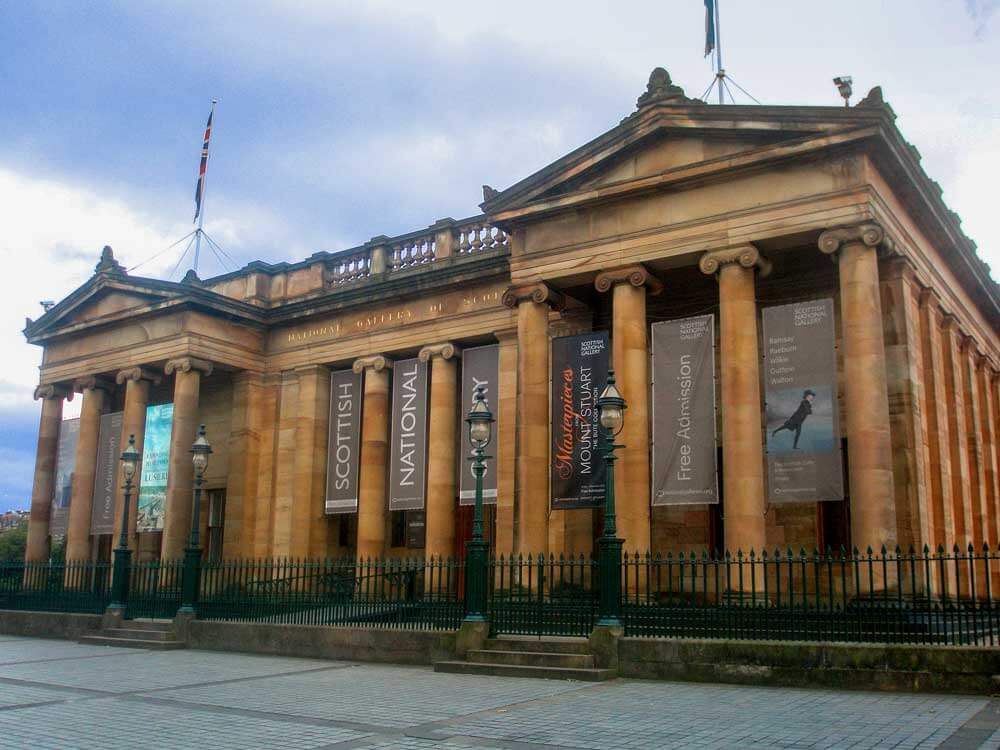 The National Galleries of Scotland consist of three outstanding exhibition spaces in Edinburgh.

There are also two partner galleries, Duff House in Aberdeenshire and Paxton House in the Scottish Borders.

In addition to display space, The National Galleries of Scotland has research facilities and storage units across Edinburgh where visitors can see items not on display. Access is free and by appointment.

Other resources include a library and print room, a prints and drawings study room and a reading room. Access is free and by appointment.

Designed by William Playfair, there are three floors that show artwork from the Renaissance to the 20th century.

Some the many displays visitors will find are:

Among the artists, whose work is on show, are Scots: Alan Ramsay, David Wilkie, Alexander Nasmyth, Sir Henry Raeburn and Charles Rennie Mackintosh.

From Europe, there are masterpieces from Claude Monet, Vincent van Gogh, Diego Velázquez, Paul Gauguin, Johannes Vermeer and many more.

Alongside the permanent collections there are also prestigious special events and exhibitions held throughout the year.

The Scottish Cafe and Restaurant

The Scottish Cafe and Restaurant, located at the Princes Street Garden entrance of the building, is privately owned by well-known Edinburgh restaurateurs Victor and Carina Contini.

Committed to using local ingredients, wherever possible, the restaurant has a range of dishes, with lots of Scottish classics to tempt their diners. There are also a vegan and a children’s menu. 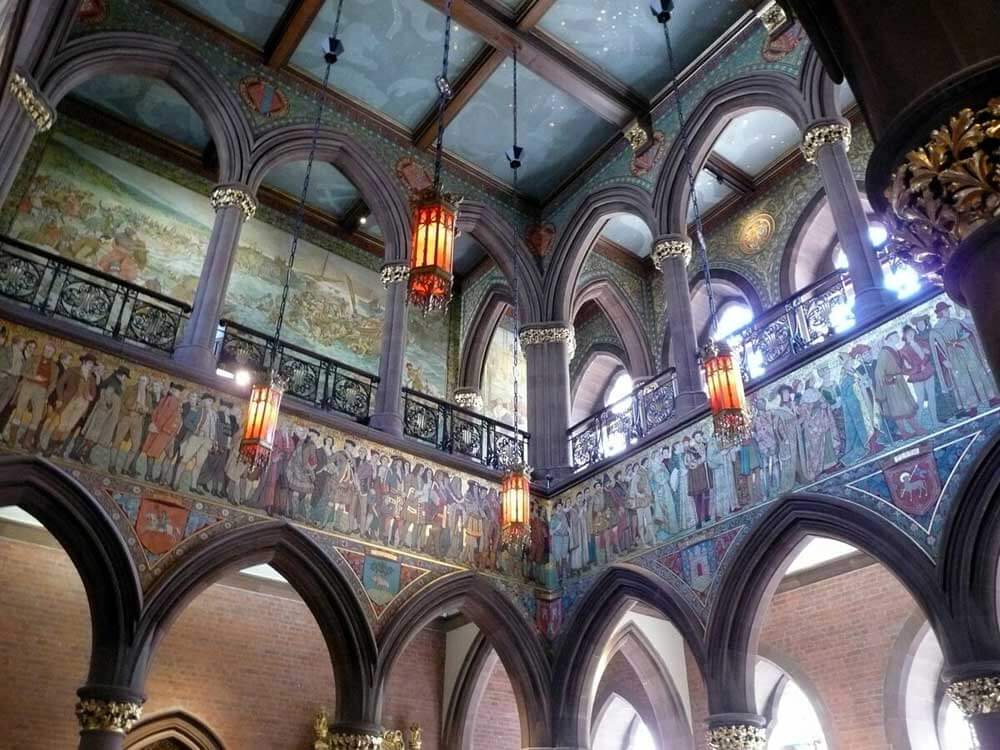 It was this 18th century founder of the Society of Antiquaries of Scotland (1780) whose collection of portraits of famous Scots became the basis of the national portrait collection.

However, it was John Ritchie Findlay, the chief proprietor of The Scotsman newspaper who paid for the construction of the gallery which opened for business in 1889. Sir Robert Rowand Anderson, the designer of the Edinburgh Medical Schools, was the architect.

It was the world’s first purpose-built portrait gallery.

The building was renovated between 2009 and 2011, creating more display space while returning the building to its former Victorian glory.

One commentator said, “It celebrates the history of Scotland and the Scots who have inspired and changed the world.”

Outside, above the door, are two coats of arms of Scotland, one from the 14th century and the other from the 19th century. Statues of two of Scotland’s greatest heroes – William Wallace and Robert the Bruce guard the entrance.

The Great Hall is home to the portraits of some of Scotland’s best-known historical figures including: David Hume, Robert Burns, Robert the Bruce, Sir Walter Scott and some of the Stuart monarchs.

The magnificent decorative frieze that winds its way around the upper balustrade of the Great Hall displays a procession of important figures in Scottish history, not just Scots, stretching, in chronological order, from the 19th century to early man.

At the heart of the frieze is a figure of Caledonia, a representation of Scotland, drawing back a curtain to reveal a starry night.

The ceiling decorations continue the theme with a depiction of the night sky in the northern hemisphere.

On the east wall of the hall, an elaborately framed portrait of John Ritchie Findlay takes pride of place.

The Great Hall is without doubt a hugely thought-provoking space.

The Visual Culture of the Jacobite Cause is an exhibition dedicated to the Jacobites (supporters of James VII and II). It’s the largest and most significant collection in the world on the topic and continues the Scottish history theme.

All the key figures involved in the Jacobite movement are represented, as are some of the most important events like the Battle of Glenshiel in 1719 when Jacobite forces were defeated by a government army.

While Scotland’s history and the men and women who have made their mark play an important part in the various exhibitions there are plenty of contemporary figures, some better known than others whose likenesses adorn the gallery walls.

Along with an exciting range of permanent collections, there are special events and visiting exhibitions throughout the year.

There is a busy and popular cafe and gift shop. 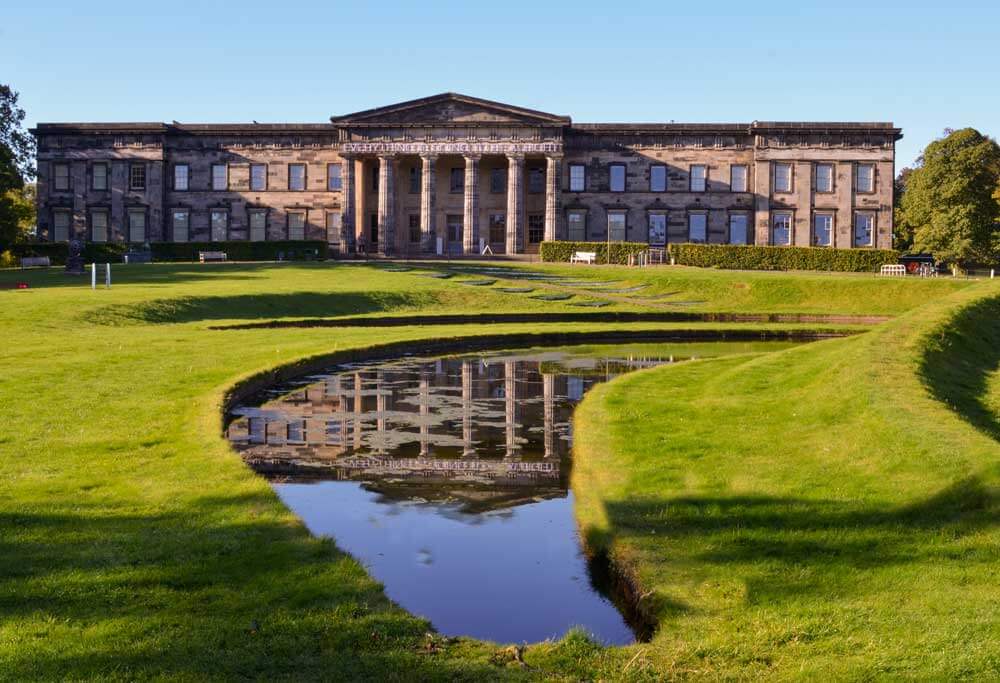 Housed in an imposing neo-classical building designed by William Burn in 1825, The Scottish National Gallery of Modern Art has two galleries, Modern One and Modern Two. It’s also home to the Photography Gallery, the Victorian Library and the Prints and Drawings Study Room.

Formerly a school it opened at its present site in 1984.

Their collection of modern and contemporary art includes:

Among the many artists whose work is on show are Tracey Emin’s Roman Standard and Eduardo Paolizzi’s Master of the Universe.

The beautiful grounds are the perfect setting for their sculpture park which has works from Henry Moore, Barbara Hepworth and many more.

It was Charles Jencks who designed the landscaped lawn with, “serpentine-shaped mounds complemented by crescent-shaped pools of water” to create Landform Ueda.

There is of course a shop that stocks a range of Scottish gifts, books, craft and design items.

Entrance is free but donations are always appreciated.

Originally designed for Lord Braco, 1st Earl of Fife the house is now a Historic Environment Scotland (HES) property with what can only be called a varied history.

Unsurprisingly, alongside some of the original content, the house has a collection of art from the National Galleries of Scotland.

Paxton House, a few miles south of Berwick-upon-Tweed in the Scottish Borders, is a beautiful Palladian house built by Patrick Home between 1758 and 1795.

While some of Home’s original paintings remain on show the collection is enhanced by works from the National Galleries of Scotland.