Home » Things to do in Edinburgh » St Giles' Cathedral

Founded in Edinburgh Old Town in 1124 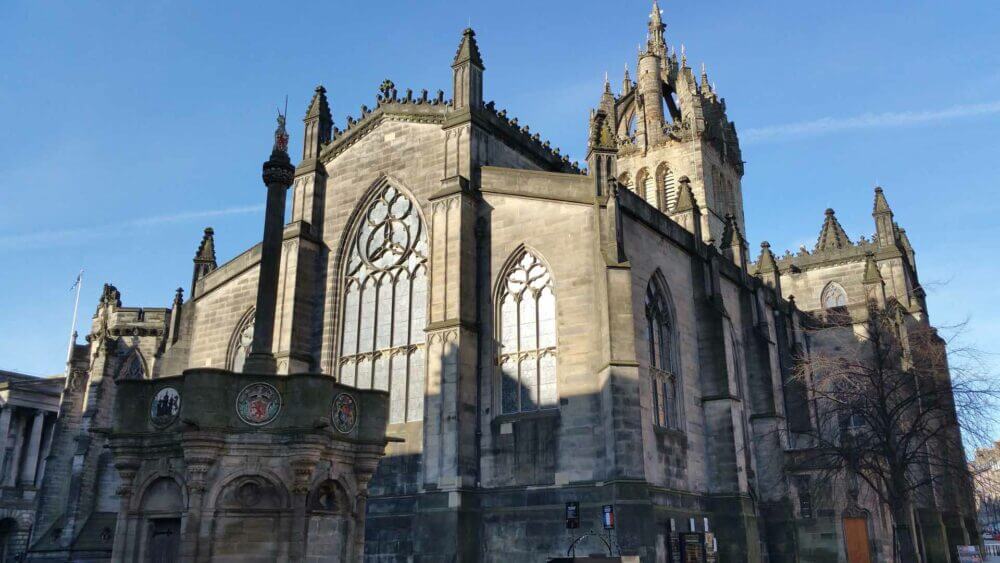 Pride of place on Edinburgh’s Royal Mile goes to St Giles’ Cathedral, its famous crown steeple dominating the Edinburgh Old Town skyline.  For over 900 years the cathedral has watched over the city in silent witness as the history of Scotland unfolded on its doorstep. There is no more evocative place to visit in Edinburgh.

Today a visit to the Cathedral will give you the opportunity to quietly absorb the incredible atmosphere of the building and remember the people who created its history.

Historians are unsure why this church was dedicated to St Giles.  Born in Athens around 640, he became the patron saint of lepers, beggars and cripples.

Although he was popular in many Catholic countries, churches in Scotland were traditionally dedicated to Scottish or Irish saints.  Nevertheless St Giles it was, the connection reinforced when Sir William Preston gave the church an arm bone said to belong to the much-venerated saint.

Edinburgh was given to the flames

Like many structures in medieval Scotland, the first St Giles church was a victim of skirmishes and warfare.  In 1385, an English army under Richard II crossed the border to avenge an attack by Scots the previous year. According to historian J Cameron Lees, “Edinburgh was given to the flames and nothing spared of the town.” Of St Giles’ only the entrance porch, parts of the choir, nave and the base of the spire were spared.

Work began in 1387 to rebuild the church but unlike the original building which was roofed with wood the builders were instructed to ensure the construction was, “Thekyt with stane.”

Over the next 150 years, new chapels were added, indeed at one point, there were nearly 50 altars in the church.

The church is inextricably linked with John Knox, a towering figure in Scottish history and widely regarded as the father of the Scottish Reformation.  This firebrand preacher became minister of St Giles’ (1559-1572) and spent much of his tenure delivering sermons denouncing Mary Queen of Scots with unrelenting hostility.

The Reformation also brought physical change to the building. With the new order, there was a determination to sweep away all the signs of the old ways.  The large numbers of altars were ripped out, and gold, silver and other valuables were catalogued and removed. It must have seemed an austere and desolate place with all its finery gone.

Restoration of the cathedral

In the early 19th century the church was in a poor state of repair and in 1829 the government made a grant to the city authorities of £12,600 for the restoration of the building.

The architect appointed was the now notorious Mr Burn.  What followed said one former minister was “deplorable and can scarcely be conceived by those who have not themselves seen what was done.

The three inner chapels on the south of the nave with the re-vestry, south porch and part of the Holy Blood Aisle were cut off… All the niches outside the building with the rich canopies were swept away.

Lord Provost of Edinburgh, (1865-69) William Chambers said, “So much for Mr Burn’s improvements on St Giles… fortunately the spire escaped his attentions.” By 23 May 1883, the restoration was complete and a public service was held. Over 3000 people filled the building.

The cathedral is crammed with countless historical treasures to explore so leave plenty of time to make sure you see everything you want to. If you’re on your first visit to Edinburgh, remember you may not get the opportunity to come back again, so it would be a shame to miss anything.

Where is St Giles’ Cathedral?

This ancient Edinburgh cathedral is situated on the High Street part of the Royal Mile which lies at the heart of Edinburgh’s Old Town. It lies close to both Edinburgh Castle and the Palace of Holyroodhouse.

It’s clearly visible from most parts of the city centre so it’s not hard to find.

If you’re walking and that’s the best way to get around Edinburgh, it’s less than a mile from Waverley Station. It’s an uphill journey and the streets are crowded in the summer so leave a bit of extra time to get there. There is no public parking but you can be dropped off fairly close to the entrance. There are some mobility issues inside the building so check before you go.

For information on opening hours, cost of entry and other tips to help you plan your visit, go to the cathedral website.