Sir Walter Scott, Edinburgh Castle and the Honours of Scotland

This is a short guide to places associated with Sir Walter Scott in Edinburgh and nearby.

For everybody with an interest in this prolific 19th century writer, the city of his birth retains some evocative reminders of historic events, people and places that tell them more about the life of Sir Walter Scott in Edinburgh.

Sir Walter Scott was born in College Wynd in Edinburgh’s Old Town on 15 August 1771. He also lived in George Square which is now part of the University of Edinburgh campus.

sir Walter Scott studied at the University of Edinburgh

Scott subsequently studied a variety of subjects at the University of Edinburgh including Scot’s Law, Roman Law and moral philosophy taught by Dugald Stewart, one of Edinburgh’s great Scottish Enlightenment figures.

The University of Edinburgh, Old College

Eventually, in 1795 Scott became an advocate. He would later spend much of his life in the Scottish Borders.

As a writer, Scott was an important figure in the development of the historical novel bringing together historical events and fictional characters.

You don’t have to look far for signs of ties to the city of his birth. The entries below are just a few of the places in Edinburgh connected to Sir Walter Scott.

Many of Edinburgh’s most famous landmarks and best-known events inspired his writing, much of which explored the Scottish psyche encouraging, in the process, a heroic and romantic view of their country.

In the early years of the 19th century, Scott was one of the world’s best-known writers so It’s hard not to begin with The Scott Monument in Princes Street Gardens. This striking Gothic edifice, which opened in 1846 is now one of Edinburgh’s most popular visitor attractions

This feature article on Truly Edinburgh says more about the Scott Monument.

Nearby Waverly Station which sits between the old and new towns opened in 1868 (current version) was named after Scott’s Waverley (pub. 1814) set during the 1745 Jacobite rising. The hero was a young Englishman Edward Waverley.

It was the first in a series of novels known as the Waverley novels.

Edinburgh Castle and the Honours of Scotland

Several events tie Scott to Edinburgh Castle, a fortress with a remarkable history forged over centuries.

Today the Royal Palace which lies within the Castle is home to the Honours of Scotland, the crown, sceptre and sword of state. They were first used together for the coronation of Mary Queen of Scots in 1543 These priceless objects have a tale to tell.

Following Oliver Cromwell’s victory over the Scots at the Battle of Dunbar in 1650, he occupied Edinburgh Castle.

In an attempt to keep the regalia from Cromwell they were removed to Dunnottar Castle before once again being spirited away for safekeeping.

Following the Treaty of Union in 1707, the Honours were taken to a “little strong room” in Edinburgh Castle.

With permission from the Prince Regent, the future George IV, Scott and Castle officials were permitted to open a chest that had been firmly locked and forgotten for 111 years.

In a letter from Scott, addressed to John Wilson Croker and dated 2 February 1818. he said, “I have the pleasure to assure you the Regalia of Scotland were this day found in perfect preservation…”

He continued by saying, the discovery of the Regalia has interested people’s minds more strongly than I expected…”

In 1941 the Honours were again ‘rehidden’ within the Castle as a precaution against any German invasion.

In 1820, Scott was given the title of baronet in thanks for his work to ‘rediscover’ the Honours of Scotland.https://trulyedinburgh.com/scotland-history/edinburgh-new-town/

A memorial on the Castle esplanade is a reminder of the courage of Ensign Charles Ewart of the Royal North British Dragoons. A British hero at the Battle of Waterloo.

The inscription says …He captured the standard of the French 45th regiment from which the eagle badge now worn by the Royal Scots Greys is derived…” Ensign Ewart is buried on Edinburgh Castle esplanade.

Recognising his bravery, Sit Walter Scott invited him to address a Waterloo dinner in Leith in 1816 ensuring the young man’s heroism will never be forgotten.

In 1822, Scott organised, choreographed or stage-managed might be a better description of King George IV’s visit to Edinburgh, the first of a reigning monarch for over two centuries.

It was Scott’s organisation of the event, a Highland festival, packed with tartan pageantry scenes which did much to promote what one commentator described as, “the pinnacle of a new expression of Scottish romanticism which still endures.”

The portly king’s own, much too short kilt and accompanying pink tights, was a less than flattering sight.

A statue of the king which stands in the New Town is a reminder of his visit and perhaps a reminder of Sir Walter Scott’s part in the spectacle. That the 4th duke of Atholl described as “one and twenty daft days.”

A more detailed account of this extraordinary spectacle will take you throughout the city of Edinburgh.

The Writers’ Museum on the Royal Mile is dedicated to the lives of three of Scotland’s greatest writers. They are Robert Burns, Robert Louis Stevenson and Sir Walter Scott.

Less well-known is that Scott is one of the famous Scots commemorated at the Archivist Garden which lies between the General Register House and the New Register House in Edinburgh’s New Town.

The National Records of Scotland which manages the Garden say, the garden “has been planted with 57 species, all connected in some way to Scotland’s collective memory… or association with individual famous Scots.”

One of the plants in the garden is the Scotch thistle (Onopordum acanthium) a plant with fascinating heraldic connections chosen by Scott as the emblem for George IV’s visit to Edinburgh.

The thistle is now Scotland’s national flower or emblem, incorporated by Mary Queen of Scots into the Great Seal of Scotland.

The Heart of Midlothian.

Today the Heart of Midlothian, as well as being the name of an Edinburgh football team is a striking heart-shaped mosaic set into the cobbles close to St Giles cathedral.  It marks the site of the notorious Tolbooth prison which stood, in various forms, for over four centuries.

Heart of Midlothian was the seventh of Scott’s Waverley novels. Originally published in four volumes as Tales of My Landlord.

One of Scott’s best-known historical novels, it tells the story of the Porteous riots of 1736.

Central to the story is the forbidding Tolbooth prison.

For everybody yet to read the book, although John Porteous, captain of the Edinburgh city guard plays an important role in the story, the main characters are Effie Deans who is awaiting trial for murder at the prison and her sister Jeanie.

When the prison was finally demolished, Scott an avid collector acquired several mementoes including a heavy nail-studded door complete with the lock which is now displayed at his home at Abbottsford in the Scottish Borders.

Another example is the murder of the brutal murder at Holyrood of David Rizzio, secretary to Mary Queen of Scots. It’s a story used as background in The Abbot (1820) another of the Waverley novels

Straying just a few miles, around 15 from Edinburgh to Crichton Castle where Scott set parts of his poem Marmion, published in 1808.

This feature article on Truly Edinburgh says more about the Castle.

Rosslyn Chapel attracted a number of writers keen to investigate the mystery of the ancient chapel. Among them were, Robert Burns, James Boswell and William and Dorothy Wordsworth.  But perhaps Dan Brown author of the Da Vinci Code a work which introduced the chapel to a worldwide audience is best remembered.

Scott also had a fascination with what is a remarkable building.

In 1798 he rented a small cottage, a summer retreat, just a few miles from the village of Roslin where the chapel stands.

Ho wrote of Rosslyn in his poems Rosabelle and The Lay of the Last Minstrel. Also in his novel The Talisman which is about a Knight Templar.

He also wrote, “Yonder, sir, You behold the far-famed Chapelle, founded in 1446 by the powerful William St Clair…”

Scott was so taken with Rosslyn he had copies made of some of the intricate carvings for his Abbotsford home in the Borders.

As visitors to Rosslyn Chapel increased in number His enthusiasm for the place quite clearly rubbed off on others, It was a welcome but unintended 19th century marketing exercise. 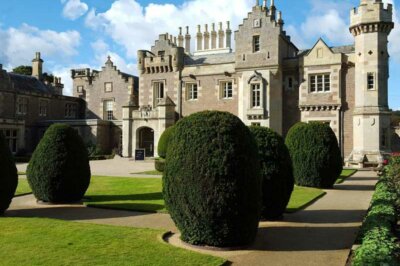 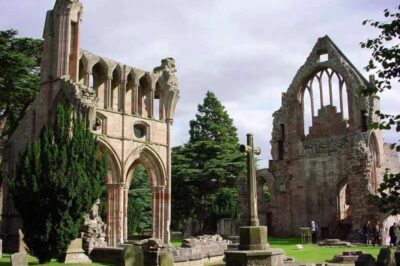 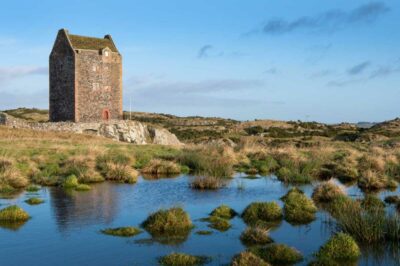