Edinburgh historic sites that should be on every itinerary.

One of nearly 200 monuments and statues in Edinburgh

The monuments and statues in Edinburgh are as much part of the city’s history as the ancient fortress that looks down from the Castle Rock.

Edinburgh has a long tradition of erecting monuments and statues, reminders of historic events and famous citizens.

In the rush to visit Edinburgh’s best-known tourist attractions, It’s easy to walk past some of the less obvious statues without pausing to wonder who they were and what their contribution to Edinburgh’s history was. That would be a shame because each has a fascinating story to tell

Edinburgh World Heritage said; “Edinburgh’s statues and monuments are among the city’s most distinctive and precious assets, often taking centre-stage and greatly contributing to the rich and complex character of the Old and New Town World Heritage Site.”

Many of the monuments listed below have links to other feature articles on Truly Edinburgh which have lots more information about the person or event commemorated. 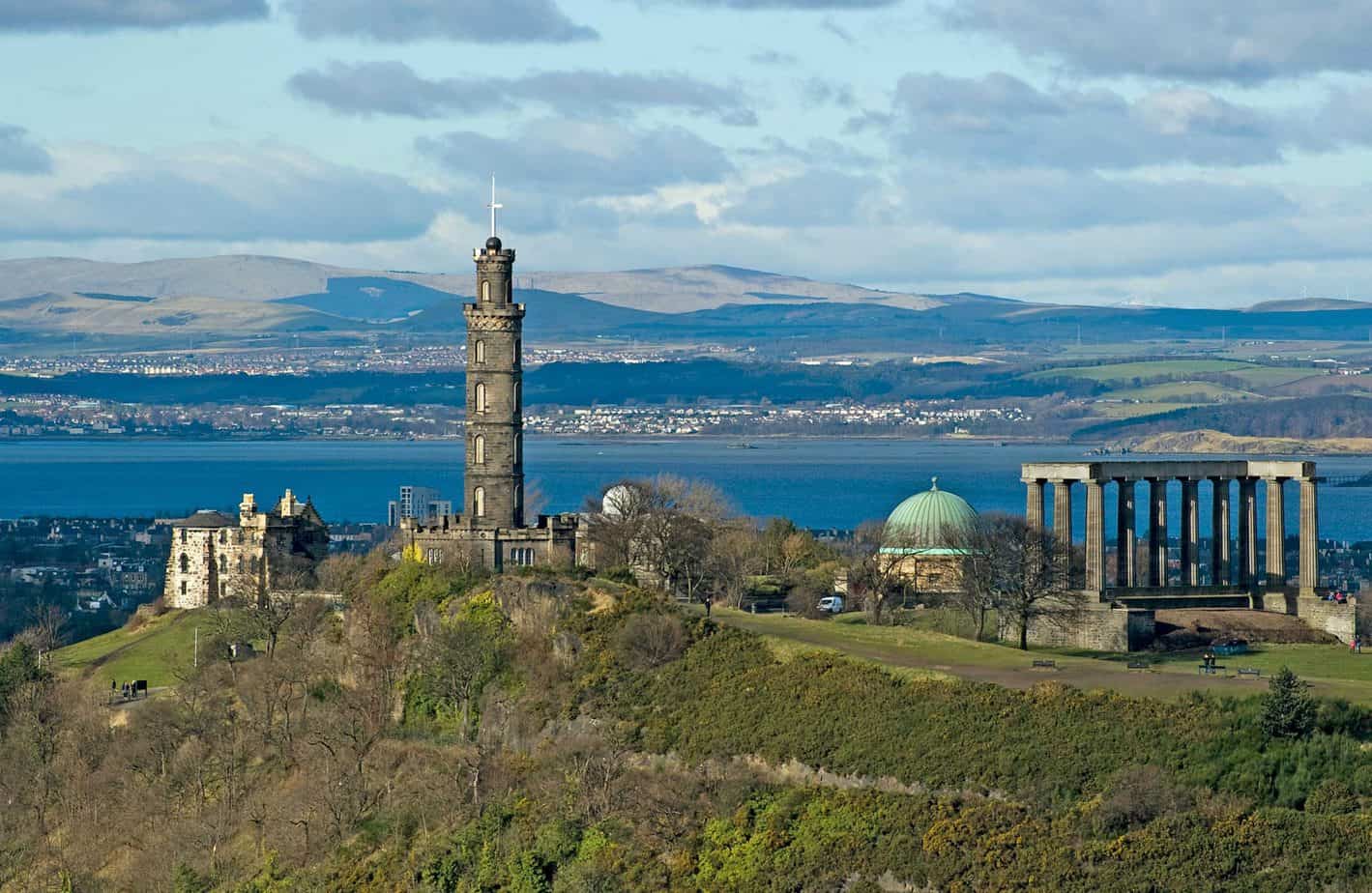 In 2007, Edinburgh City Council and Edinburgh World Heritage began a restoration project to ensure that some of the city’s best-known monuments were preserved.

Among the monuments are:

While perhaps not quite as tall as the 150 feet tall Melville Monument, the Scott Monument in Princes Street Gardens is Edinburgh’s most distinctive landmark. And you can actually climb, 287 stairs to the top to the top of it. You might be puffing a bit at the top but the view is a great reward.

Also on Calton Hill is the Dugald Stewart Monument. Stewart (1753-1828 was a distinguished philosopher and mathematician. His father was a professor of mathematics at the University of Edinburgh. He was one of the great figures of the Scottish Enlightenment.

Find out more about Dugald Stewart in this Truly Edinburgh feature article.

The statue of David Hume, regarded by many to be the greatest philosopher to write in the English language sits on the Lawnmarket, part of the Royal Mile, opposite St Giles Cathedral. More information about Hume on this Truly Edinburgh feature article.

The mounted figure of a Royal Scots Grey trooper is among the best-known of Edinburgh’s monuments. It sits in West Princes Street Gardens.

Interestingly the soldier is dressed as he would have been when the regiment went to South Africa in 1899.

A number of inscriptions remember the soldiers who died in the Boer War and World War One.

Also, in Parliament Square and sadly often overlooked is the statue of the remarkable James Braidwood who founded the world’s first municipal fire service in Edinburgh. As the superintendent of fire Engines, he helped fight the Great Fire of Edinburgh which raged through the Old Town in 1824

Greyfriars Bobby was the little dog his much-loved statue stands close to Greyfriars kirkyard close to the memorial of his owner John Gray.

Bobby, a Skye Terrier had reportedly guarded his master’s grave for over a decade

While William Chambers is best remembered for helping the little dog Greyfriars Bobby. As Lord Provost of Edinburgh between 1865 and 1869, he saw the passing of the City Improvement Act, instrumental in sweeping away much of the slum housing in Edinburgh’s Old Town.

William was also a writer and working with his brother Robert founded the publisher W and R Chambers, today part of a larger publishing business.

When you see the statue of Robert Fergusson, positioned outside Canongate Church on Edinburgh’s Royal Mile. you might well think that he was a man in a hurry.

Sometimes considered the forerunner of Robert Burns, Fergusson was a poet of remarkable depth. Born in Edinburgh’s Old Town he studied at the University of St Andrews.

The BBC described him as a “poet with an exquisite range and a corpus of around 100 poems.”

His best-known work was probably the wonderfully evocative Auld Reikie, A poem (1773) which told the story of Edinburgh, in all its finery but was not afraid to mention its depravity.

To describe Fergusson’s life as eventful would certainly be an understatement. Because his entry here is much too brief, I’ve put a link to a really good BBC article about his life and work.

William Wallace and Robert the Bruce

Robert the Bruce (left) and William Wallace at Edinburgh Castle

William Wallace and Robert the Bruce, two of Scotland’s greatest heroes stand guard at the entrance of Edinburgh castle welcoming thousands of visitors as they file through the gate.

The Mercat Cross of Edinburgh

Edinburgh’s Mercat or market Cross, which stands close to St Giles Cathedral on the Royal Mile, was where merchants congregated and ‘did business’. It was also the site of executions, other public gatherings and formal proclamations.

It seems however that Mr Amyat, the king’s chemist who lived in Edinburgh for several years had noticed others passing the Mercat Cross. He famously said: “Here I stand at what is called the cross of Edinburgh and can, in a few minutes, take 50 men of genius and learning by the hand.”

He spoke during that wonderful period of intellectual activity in Scotland, now known as the Scottish Enlightenment.

The Mercat Cross, in its present form, was built in the second half of the 19th century as a replacement for an earlier version.

However, there is some evidence to suggest that the Cross was located in the High Street to the east of St Giles Cathedral as early as 1365. Indeed, over many years it seems the monument was moved to a variety of places in the Old Town

A paper (1986) from the Society of Antiquaries of Scotland, The Mercat Cross of Edinburgh, from 1365 to 1617 – its Site and Form, written by Peter Miller paints a fascinating picture of this historic Edinburgh landmark.

The Cross also acts as the meeting point for those setting out on one of the Mercat tours visits to Edinburgh’s underground vaults. More information on this Truly Edinburgh feature article.

Duke of Wellington on horseback

The statue of the Duke of Wellington on horseback sits outside Register House on Princes Street across the road from the Balmoral Hotel.

famously the Duke is often seen wearing a traffic cone on his head, the result of some over-exuberance from the good folk of Edinburgh

Edinburgh Museums and Galleries is responsible for nearly 200 monuments placed on Edinburgh’s streets. They say,” Edinburgh monuments tell us about the history of the city – like a museum collection, but on display in the parks and streets.”